I’m happy to announce that IVP will be publishing a new book by Ron Highfield in October, The Faithful Creator: Affirming Creation and Providence in an Age of Anxiety.

The book is described by IVP as follows: 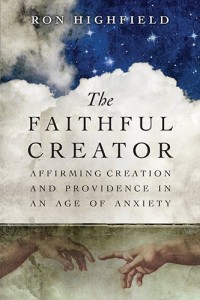 As the apostle Paul writes in his letter to the Romans (8:22), creation groans for redemption – but can we trust God to make all things new?

The doctrines of creation and providence address the question of human anxiety in the face of suffering and evil. In a world that often seems to be spinning out of control, Christian faith confesses a ‘faithful Creator’ (1 Peter 4:19) who promises a glorious future for all creation.

In this scholarly and accessible volume, Ron Highfield presents an overview of creation, providence and the problem of evil. He explores a wide range of issues, including the biblical accounts of creation, the dialogue between theology and science, models of providence, philosophical problems of evil and the proposals of open theism and process theism.

‘The Faithful Creator’ will be of value to all who wish to enrich and strengthen their faith through serious theological reflection. The apostle Peter exhorted the harassed and persecuted believers in Asia Minor to commit themselves into the hands of their faithful Creator, and this rings as true today as it did in Peter’s time.

In an endorsement of the book, I wrote:

Suffering and evil often challenge our understanding of, and love for, the God who created and rules over the world. Focusing on God’s work of creation and providence, Highfield is swimming against a stream in evangelical theology that has revised or modified aspects of the traditional understanding of God’s nature (simplicity, immutability, eternity and omnipotence). He cogently reaffirms classical theism, and he applies it very helpfully in our present context. Whether or not readers agree with Highfield’s criticism of recent departures from the classical tradition, they will benefit, as I have done, from interacting with his superb restatement of the tradition and his own constructive appropriation of it.

Highfield is a very fine philosophical theologian, with an excellent grasp of classical theism. He not only understands it well, he affirms it and re-appropriates it for our day. I substantially agree with the big picture presented by Highfield, but I get there differently because I have revised a number of the aspects of classical theism which Highfield expertly describes and defends. It is for this reason that I particularly enjoy reading his work. I find it stimulating to ponder his case for classical theism, reexamining my own model as I do so. He is very insightful concerning the philosophical perspective widely prevalent in popular culture in the secularized west, in what he refers to here as “the age of anxiety.” His Christian alternative offers a helpful corrective. This is a book which I am sure to revisit in the future. For starters, I know that I want to ponder anew his treatment of evil in the third part of the book when I prepare for a couple of lectures on the problem of evil next spring. I found Highfield’s work on this theme very insightful, when I first read a draft of it last fall.

The book’s table of contents will give you a good sense of what Highfield is doing in this book.

You can order the book now, and it should be in your hands early in October.