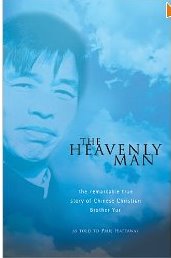 I have just finished listening to a reading of Paul Hattaway’s biographical book, The Heavenly Man: The Remarkable True Story of Chinese Christian Brother Yun. I won’t describe the life of Brother Yun at any length but, if you want more details, there is a good recap of the story at Songs of Scripture.

I should mention first that I received the book as one of the free selections offered each month by Christianaudio.com. This month’s gift is Trusting God by Jerry Bridges. In the past couple of years, I have listened to many of these books in short snatches, as I get dressed for the day or do other mindless activities. It is surprising how much one can listen to in this way, and I have benefited significantly from the free books I have been able to download. I recommend the service to you, if it is something of which you have not heard yet.

Brother Yun came to faith in Christ in the mid 1970s when he was 16 years of age, during the cultural revolution in China. Needless to say, it was not an easy time to become a Christian, and his life has been difficult but remarkably blessed by God. Very soon after his conversion, Yun was called by God to evangelistic ministry. His life was full of striking revelations through which God directed him and his wife, and the ways in which God showed his power to further his gracious work in many people’s lives are reminiscent of the book of Acts. The price paid by Christian believers in the house churches in China, to follow Jesus and to serve him, is awe inspiring, particularly when heard from the relative ease of Christians’ lives in our own society. But the story of God’s might work is very encouraging.

After God miraculously delivered Yun from his third stretch in prison, on May 5, 1977, he and his family were able to escape from China, though he spent further time in prison in Myan Mar on his way to Germany. That is now his base for ministry, and he remains committed to the “Back to Jerusalem” ministry, a Chinese Christian movement with a commitment to taking the gospel to places along the ancient Silk Road. His life and ministry are not without controversy, including charges by some who consider the “Born Again Movement,” within which he is a leader, to verge on heresy. But everything I heard in Hattaway’s account has been edifying to my own life as a follower of Jesus.

Brother Yun is an example of a Christian who gives it all for the Lord Jesus Christ. What a blessing that we are so privileged to have his books. His second book, “Living waters” should be a text book for all Christians who want to serve out Lord Jesus in a way that embraces reality. Thank you brother Yun. and The Lord keep blessing you with the sharing of your message.