What God is doing amongst Muslims these days is quite remarkable, but this has generated difficult questions for Christian churches in predominantly Muslim nations, as they work through issues of contextualization. What should Christian churches look like in those contexts? The debate over the “Insider Movement” is quite intense these days, with both missionaries and former Muslim believers lined up on both the pro and con side.

Now Christianity Today alerts us to another challenge to which we need to pay attention and about which we need to pray. Confucianism is on the rise and new opportunities for dialogue between Confucian and Christian scholars and leaders are being created. Katherine Burgess reports [picture in CT is from “Puck Magazine/Library of Congress”]: 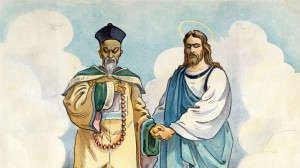 Christianity and Confucianism continue as two of China’s fastest-growing belief systems, thinkers on both sides continue to debate their proper relationship.

In March,  ChinaSource devoted its academic journal to the topic. Recent symposiums held at Gordon-Conwell Theological Seminary and the Oxford Centre for Mission Studies convened Confucian and Christian scholars for renewed dialogue.

As a result, the two sides are experiencing a “warming of relationship,” said David Ro, director of Gordon-Conwell’s Center for World Missions and the Lausanne Movement’s deputy director for East Asia.

“Only recently are some Christian thinkers in China making a deliberate effort [at] better integration,” said Fenggang Yang, director of Purdue University’s Center on Religion and Chinese Society.

The timing is ripe, given that Confucian leaders increasingly want their beliefs to define China, and the government seems to want the same, said G. Wright Doyle, director of the Global China Center. Some want Confucianism revived as an official religion, alongside Buddhism, Daoism, Islam, Catholicism, and Protestantism.

But most Chinese see Confucianism as only a “moral system,” said Yang. Meanwhile, he argues, churches have sought not to rival or replace Confucianism but to revitalize and transform it, emphasizing parallels with Christianity in order to evangelize in a Confucian context.

“The Christian message is contextualized in cultures, and Chinese culture may provide something that’s distinctive from existing theologies based on European or ancient Greek culture,” said Yang. With Confucianism “serving as the cultural source for theological thinking,” it might “enrich our understanding of the Christian message.”

Many Chinese Christians are not conscious of the debate, but “battles fought in the intellectual realm” affect many, Ro said. “The average person won’t think, Am I Confucian or Christian? He’s probably thinking, I’m both, or a shade of either.“

4 replies on “Christianity and Confucianism: a rising issue in contextualization”

Calvinists (no matter what lying extras they try to add to that term) will oppose Confucianism precisely and only because it is a moral system. Whereas true Christians will acknowledge that it comes from the natural law that God put in all mankind’s conscience.

I think Confucianism (as I understand it from the Analects) has many teachings that fit quite nicely with Christianity. Confucius does not often focus on God or the afterlife but he does emphasize the importance of education, caring for the family, and justice. These types of things could easily be seen as conversational bridges for preaching the gospel.

However, the concept of praying to ones ancestors (which Confucius mentions often) and some pantheistic elements that, at times, seem to be found in the system need to be clearly demarcated as out of line with Christian orthodoxy. I think, though, that Confucian texts could be used in much the same way that the early church used Greek philosophy (though some theologians went too far with it, I suppose): take what is helpful and compatible with Christian theology and leave what is incongruous with it.

As a Christian I stummbled across this website from research I was doing. The name seemed strange to me confucianism… which you know very well reminded me of confusion. This is just a confused religion. Don’t let the enemy confuse you. It says in the bible that we wrestle not with flesh and blood but with forces unseen in the waking world around us. Dont let these doctrines of demons confuse you christians and the people who practice this religion… ill pray for you cuz I love you just like God does and the only way to everlasting life and not an eternity in the firery pit of hell is through Jesus Christ. Come as you are he says. Its a gift so freely given. Dont let people used by demons confuse you from the truth. This religion is not the way. Its the way to death and hell. But Jesus. If you dont know Jesus start looking for him. Its a promise and God is faithful that if u seek you shall find. That peace and reassurance that Jesus died for us so we could be saved for the forgivness of our sins.. its so freely given to whoever believes. Repent turn from ur false idol whorship and from ur sins and u will be forgiven. Peace and love to all my brothers and sisters. I hope this message touches ur hearts and u find the real truth and not be confused by demons from hell