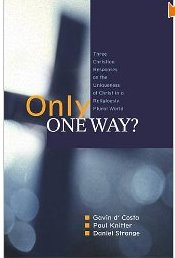 Knitter responds to Gavin D’ Costa as a fellow Catholic and a friend, but he asserts that D’ Costa is wrong on a number of critical points:

D’ Costa agrees with Knitter that there is novelty in terms of fresh doctrinal expressions within the Church, as is seen in the Marian developments (193), but he affirms the magisterium’s authority to oversee Catholic institutions and to teach Catholic faith and morals (195).

D’ Costa supports a sacramental Christology within a constitutive Christology rather than putting them in opposition to each other (196), but he is concerned that Knitter “would hold his position as a pluralist if Jesus did not exist,” since he believes that God is known savingly without Christ.

The necessity of the Church in salvation is “predicated upon the sacramental presence of Christ in the Church,” and so Knitter needs to heed his own principle that grace is mediated through the social tangible historical (197).

D’ Costa thinks his position regarding other religions as a means of salvation to be more dialectical than Knitter has portrayed it to be. He clarifies:

Strange finds his position as a critic of D’ Costa’s proposal more difficult than Knitter’s, because of Strange’s identity as a “Reformed evangelical Protestant” (175). Systemically and methodologically, D’ Costa’s position is marred by 3 fundamental commitments of Catholicism:

In particular, Strange is dissatisfied by the lack of biblical support for D’ Costa’s proposal (and that of his Church) that people saved outside the church are somehow related to it, a view which D’ Costa bolsters by appeal to Christ’s descent into hell, purgatory and the limbus patrum. Protestants reject these ideas on account of the “exegetical flimsiness” of the support offered for them (178).

D’ Costa’s theology of religions works “within the distinctively Catholic construal of the relationship between nature and grace,” which posits much greater continuity between nature and grace than does the Reformed foundation of creation-fall-redemption (179). That continuity leads to various affirmations: (1) natural law, (2) the liberty of indifference, (3) post-fall humanity yearning for God, (4) religions as exemplifying a genuine search, functioning as a preparation for the gospel, (5) the potential for interreligious pursuit of the common good and of social justice (179-80). By contrast, Strange’s Reformed perspective emphasizes the depravity of fallen humanity, of antithesis and idolatry, and it requires heavy qualification of any talk of truth and holiness in other religions (180-81).

Soteriologically, Strange is worried that Christ’s finished work is compromised by D’ Costa’s view of (1) human works as meritorious, (2) divine acceptance founded on imparted righteousness, and (3) theism and morality as adequate objects of faith.

D’ Costa grants that in some respects his Catholicism and Strange’s Calvinism are worlds apart, leading to “serious methodological and substantive differences” (185). But he wishes to correct two basic misunderstandings about the roles of the Bible and the magisterium. Contra Strange, D’ Costa and classical Catholic sources do not suggest that the magisterium is “revelation” (185): it is authoritative only when it “faithfully teaches the deposit of faith to be found both in the Bible and the tradition, in so much as tradition testifies to the truth of ‘revelation’ in the Bible, which is Jesus Christ” (186). The “magisterium is bound to the Bible first and foremost, and the tradition’s interpretation of the Bible secondarily;” it “cannot teach anything novel” (186). Catholics triangulate “scripture, tradition and teaching authority rather than subsuming the second two under the first (sola Scriptura) or refusing the second two any status at all (nuda Scriptura)” (188).

D’ Costa agrees with Strange that “the Bible is the ‘source’ and Christ’s once-for-all-revelation is sufficient for salvation, but this does not preclude (but actually requires) his sacramental presence through the power of the Spirit in his Church,” which makes Christ present in history through its proclamation, witness and sacraments” (187).

It is wrong to suggest that Catholics view the Church as a “prolongation of the incarnation,” because that falsely conflates Christ with the Church (187).

D’ Costa agrees with Strange that theological concepts which are not grounded in the Bible are worthless, but he suggests that they disagree on the practice and, therefore, on the conclusions that can be drawn (189). He looks, for instance, at Acts 17:16-34, and he sees there “a ‘potentiality’ in the believers of the ‘unknown God’ which could become an ‘actuality’ if they accept the true God,” because they had resisted the idolatry of fellow Athenians. So, their “unknown God” was a preparation for the gospel (190). Rather than there being only two classes of people, as Strange suggests, D’ Costa posts a third “which bears analogy to the world religions” (190). For instance, Islam as a whole is a false religion, but there are elements within it which might act as a praeparatio. With regard to Strange’s charge that the concept of the limbus patrum is exegetically unfounded, D’ Costa asks, concerning 1 Peter 3 and 4: “Why should ancient reflection which was given normative creedal status for more than a thousand years be overthrown by moderns?” (191). Granted, beliefs must be derived from the Bible but this may be implicitly as well as explicitly, and “the continuous tradition of the Church’s reading of the scripture must also be considered” (191).

D’ Costa is grateful for the attention Strange has drawn to the issue of the relationship of nature and grace, because he sees this as at “the heart of the differences between the three of us” in the debate (191). He is critical of Knitter “for conflating nature and grace, such that the incarnation is ultimately superfluous for the salvation of the world,”  and thereby minimizing the reality of sin and the necessity of the cross. On the other hand, while he agrees with Strange that “without Christ, human nature cannot be transformed by grace into redeemed human nature,” this is precisely why he affirms post-mortem choice, “so that salvation cannot be prised apart from explicit faith in Christ” (192). On this point, D’ Costa notes his difference from some fellow Catholic inclusivists, like Jacques Dupuis. D’ Costa emphasizes that his position does not depend on works or fallen human righteousness, “but on God’s justice and mercy in providing an opportunity to hear the gospel” for “those who strive against their human nature to seek justice, love and forgiveness and who have never heard the gospel through no fault of their own” (192).

I am strongly appreciative of D’ Costa’s rejection of the relativistic pluralism put forward by Knitter, and I think that he has identified its key flaws. My own reading of Catholic teaching confirms D’ Costa’s rather than Knitter’s assessment of the Catholic Church’s stance on the instrumentality of other religions. (See, for instance, my essay on John Paul II’s encyclical Redemptoris Missio, in The Legacy of John Paul II.)

On the other hand, the interchange between Strange and D’ Costa was very frustrating for me. Naturally, as a fellow Reformed evangelical Protestant, I have strong affinity with Strange’s methodology. But I think that D’ Costa has reached the better understanding of God’s saving work outside the church and of the which in which God works within the context of the religions, while not having chosen these as his instruments. So, I believe that a solid biblical case can be made for the position which D’ Costa (and John Paul II) puts forward, and I am disappointed that the fundamental methodological differences between D’ Costa and Strange necessarily got in the way of serious engagement with the biblical teaching on this subject.

My frustration notwithstanding, however, I am grateful that this sort of conversation about matters very important to Christian faith has been carried on between an evangelical and two Roman Catholics. Although the discussion of the theology of religions has been made more complex by broadening the conversation across that large Protestant/Roman Catholic divide, the book makes a distinctive contribution by putting on the table, at the same time, the difference between these major traditions and differences among Christians within each of those traditions regarding the scope and means of God’s saving work in the world.

I would enjoy a conversation with D’ Costa about the relative merits of his proposal (similar to that of Protestants Donald Bloesch and Gabriel Fackre), that the unevangelized have a post-mortem opportunity to be saved through explicit faith in the gospel, and my proposal, that everyone meets Christ at death and then responds to Christ in a manner consistent with their response to God by the means of revelation already given to them.

D’ Costa’s position is a hybrid of gospel exclusivism and post-mortem accessibilism. In arriving at my own position (general revelation accessibilism), I recall that I pondered seriously whether it would be better to portray salvation as occurring only at the moment of a person’s meeting Christ, at (not after) death. This would have better satisfied gospel exclusivists. I am still inclined to believe, however, that Scripture gives us reason to believe that some people are saved during their lives, by forms of revelation less complete than the gospel, even though this might legitimately be spoken of in the terms of “preparation for the gospel” which D’ Costa prefers. I concur with Strange that biblical support is lacking for belief in post-mortem opportunity for faith by those who have not believed during their lives, but I think that his bar for saving revelation is set higher than Scripture warrants. Then again, his essay in this book will give him one more chance to convince me otherwise.

Earlier posts in this series: Part 1

Thank you for a very clear exposition of the main ideas, and for your helpful personal reflections.
I am afraid that D’Costa’s use of “post-mortem choice” is uncareful language that could give incorrect impressions. D’Costa holds on to what he calls “the Augustinian prohibition” (= no post-mortem freedom or change!). In fact, he critiques Lindbeck for not honouring this ‘prohibition’. (See his Christianity and the World Religions, Wiley, 2009, p.164). D’Costa posits a post-mortem epistemological encounter with Christ, for those who are already ontologically related to him, but have not had an ‘existential’ encounter with the gospel. So those who, post-mortem, meet Christ in the Limbo of the Just, are analogous to the OT saints. What happens post-mortem is not something new, but a maturation of the course their lives have taken. In that sense, I believe that it is very similar to what you suggest, except for the exact ‘timing’ of this encounter.

Thank you Wouter. Your comments are helpful.