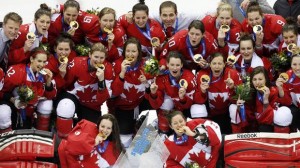 As the women’s hockey game at Sochi neared its end yesterday, one of my uncles wrote this on Facebook

I haven’t asked him what he knew about the answer to his question about prayer but, as I lay in bed this morning I pondered that question. Having consumed that time, I thought I might try to redeem it by jotting down my thoughts for others to ponder too.

What I know and don’t know

I know now that, out of all the possible worlds God could have chosen, he chose the one in which the Canadian women’s hockey team won the gold medal in 2014.

I know that a great many Canadians wanted that to happen, whether or not they explicitly asked God to bring it about.

I know that God knew my uncle’s desires, even before he wrote his FB updates about them, whether or not he specifically formulated them in prayer requests.

I know that God often graciously chooses to give us the desires of our hearts even when we don’t think them important enough to make them the subject of a prayer request, but I also know that this should not discourage us from voicing our desires to God as petitions.

On the other hand, I also know that our overarching desire at all times and in all our prayers should be that God’s kingdom may come and that his (moral) will may be done on earth. So we do best to formulate our explicit prayer requests in ways that express our sense of how it would look here and now if God were not only completely in control (which he is!) but if everyone were completely submitted to God’s will (which they are not, in case you hadn’t noticed). So I can see why a Christian who really wanted the Canadians to win the gold in women’s hockey might not think it a worthy prayer request because they could not specify how they thought that would contribute to the advancement of God’s reign here and now. On the other hand, I can also imagine situations in which some Christians might know something specific about the Canadian players and/or the American players, and might have reason to believe that if God were to give one or other team a win, it could advance God’s reign in a small but not completely negligible way. So, it might be appropriate for some Christians to make a specific prayer request in this regard where it would not be appropriate for others to do so.

I also know that many of God’s people world, such as those in Syria and the Ukraine, and in prison in North Korea etc., neither knew nor cared that the gold medal was in contention at the Olympics this year. But I don’t think that necessarily invalidates the desires (prayed or unprayed)  of Canadian Christians at that particular moment, provided those desires are part of an overall and more significant package of desires which gives high priority to the well being of people, particularly God’s people, in the many troubled areas of the world. There is a time to watch a hockey game, and there is a time to pray for peace and justice in the Ukraine.

I know that both Canadian and American Christians to whom the hockey game yesterday was important should be very thankful to God that he chose this world, in which they live in a country where it is possible for young girls to grow up in a peaceful society, with parents who could afford to buy them expensive hockey equipment and drive them to the many hockey games they had to play in order to develop into Olympic highly skilled hockey players. For many of God’s people around the world, none of this is possible.

As I said earlier, I know that God chose this particular world, in which the Canadian women won the gold medal at Sochi. What I do not know is how that came about in the world God chose, relative to God’s general and special providence. I believe that a great deal of what happens in the world, though an integral part of God’s overall plan, comes about by the agency of God’s creatures without particular intervention on God’s part. He is no less in charge when he “intervenes” in special providence than when he lets things happen by natural created means, but unless God reveals to us that he had acted in a particular way we do not know that he did. Sometimes, as in healings that we call “miraculous,” we are particularly thankful to God because we can not conceive of how that result could have occurred without intentional “supernatural” action by God. But we should be constantly thankful for the good things that happen in the normal course of events, because we know that they too were chosen by God when he chose this world with all its remarkable complexity. So, even Canadian Christians who did not specifically ask God to give the Canadian team a win can legitimately thank him that they won, without knowing exactly how God acted to bring it about.

Well, that is enough rumination for now. I don’t watch sports but, in spite of being a third culture kid, I am sufficiently Canadian to be happy that the Canadian women won the gold medal in hockey yesterday (in curling too!). But mostly I am happy to know that God is good and that he does all things well, and that, even though I often can not understand just why he seems not to be doing what it seems to me he could do in particular situations in the world, I can be confident that in some incomprehensible way the total package that constitutes the history of this world was chosen by God and is for his glory, and the day is coming when we will be able to glorify him much more intelligently because we will understand so much better the big purpose of God within which the countless little events like Olympic hockey games played a part.

5 replies on “Did God give the Canadian women’s hockey team their gold medal in answer to prayer?”

From your non-Calvinist friend (who thinks he knows many of these same things, but certainly not all of them): Thank you!

I would have expected some differences, Daryl, but I hope that thinking through where you agree and where you differ was a profitable exercise.

I remember being at the Lincoln memorial a few years back in Washington DC., where Lincoln’s words are enshrined stating that both the North and the South in the US Civil War called upon the same God for victory on the battlefield. From his second inaugural address: “Both read the same Bible and pray to the same God, and each invokes His aid against the other. It may seem strange that any men should dare to ask a just God’s assistance in wringing their bread from the sweat of other men’s faces, but let us judge not, that we be not judged. The prayers of both could not be answered. That of neither has been answered fully. The Almighty has His own purposes.” I am not sure how this fits in with hockey; but your comments reminded me somewhat of Lincoln — though I believe that God, being who He is, could actually have only created the world which He did.

Keith, Gail and I spent a couple of very interesting days in Gettysburg a few years ago. It was a sobering but very educational time. Lincoln’s words certainly make good sense in light of what we saw there.
I am interested in your belief that God could not have chosen to create a different world. I’d be interested in your reasons for this. Is it because you belief that this is the “best possible world” and that God’s perfection therefore obligated him to create this world, if he were to create a world at all? Or do you have some other reason for your belief?
Do you believe, perchance, that creation was also necessary for God, being who he is, or was he free to create or not to create but, if he chose to create, only free to create this particular world?

God lets it all happen. Good and bad.

But He uses it ALL…for His purposes.