On a recent cruise, we enjoyed lectures regarding the history and culture of the places we were going to be visiting. In one of those lectures, we were told once again that medieval mariners (and medieval people in general) believed that the world is flat. I’ve heard that very often, and I have just assumed it to be true, but a recent blog post by Louis McBride has now offered a helpful corrective. McBride identifies this particular idea as just one of many myths about the medieval period which we need to stop believing, according to Chris Armstrong, in his recent book, Medieval Wisdom for Modern Christians.

Armstrong’s book sounds fascinating, and it could be particularly beneficial for me because, a few years ago, I enjoyed reading William Manchester’s book, A World Lit Only By Fire. Much of my current mental image of the medieval period was formed by Manchester’s very interesting book. But here’s Armstrong’s evaluation of what I took to be a reliable account. 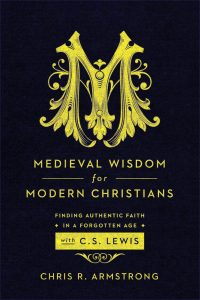 Many modern Protestant Christians still assume medieval people were ignorant haters of scientific knowledge who believed in a flat earth and were sitting around waiting for the Enlightenment to happen so they could finally crawl out of the darkness and into the clear light of reason. In order to get back to the genius of medieval theology, we first need to overcome the stereotype that medieval people were, well, stupid. In fact, nothing could be further from the truth.

One source of such nonsense today is a misbegotten (and still bestselling) book by William Manchester called A World Lit Only by Fire. Manchester was a historian, but he didn’t let a staggering lack of knowledge of the medieval period hinder him from filling the book’s pages with the Enlightenment polemical agenda hinted at in his title. This resulted (and I’m just scratching the surface here) in lurid and titillating exposés of the period’s supposed barbarous sexual habits and a straight-faced argument that everyone in the Middle Ages believed the world was flat. Historian of science (and editor of the eight-volume Cambridge History of Science) David Lindberg says, “Nonsense.”

Manchester’s story goes that before Columbus, Europeans believed nearly unanimously in a flat earth—a belief allegedly drawn from certain biblical statements and enforced by the medieval church. This myth, according to Lindberg, seems to have had an eighteenth-century origin. For their own reasons, the philosophes of the Enlightenment era, and many academics since then, developed and perpetuated the stereotype of medieval ignorance. But that doesn’t make these stereotypes true. In fact, American author Washington Irving flagrantly fabricated evidence for the flat-earth belief in his four-volume history of Columbus. It was then picked up and widely disseminated in twentieth-century America by the anti-Christian president of Cornell University, Andrew Dickson White (1832–1918), and others.

The truth is that it’s almost impossible to find an educated person after Aristotle (d. 322 BC) who doubted that the earth is a sphere. In the Middle Ages, you couldn’t emerge from any kind of higher education, whether in a cathedral school or in a university, without being perfectly clear about the earth’s sphericity and even its approximate circumference. (pp. 76-77)

Well, well! My thanks to Louis for passing on this significant correction, assuming, of course, that Armstrong is not also wrong. Once again, I’m reminded that we cannot believe everything we read. On the other hand, I find it easy to accept Armstrong’s perspective in this matter, because I have developed a significant appreciation for medieval theology. That took me rather by surprise, because I had often been given the impression that, theologically, as in other ways, the medieval period was “the dark ages,” and medieval scholasticism was of little help and possibly even harmful. But I have learned a good deal from the so-called “Protestant scholastics” of the 17th C, and this changed my attitude to the medieval theologians on whose foundation Reformed theologians were building. So I like the sound of Armstrong’s project to retrieve some of the wisdom God gave to his people in a period in the life of the church which has often not been well judged by evangelicals, who often speak as though nothing good happened before God raised up Martin Luther and fellow reformers in the 16th century.

One reply on “Did medieval people believe that the earth is flat?”

I recommend reading Lewis’ The Discarded Image, I found it be a very illuminating introduction to the medieval imagination and the world they inhabited.