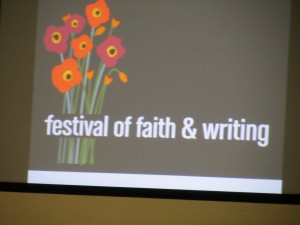 Last month, Gail and I had our third opportunity to attend the Festival of Faith and Writing which Calvin College organizes every other year. Once again, it was a very satisfying experience, and I’ll share a few thoughts about some of what I heard there, for the benefit of those who could not attend, or for interaction with some who may have been there and understood things differently from me. No two of the many people in attendance will have had the same experience.

The festival began with brief morning prayers led by Luci Shaw, who read us some of her poems, chosen around the theme “The Slow Pleasures.” The poems were excellent, and they effectively led us into worship. I was made newly aware of how much I could benefit from reading more poetry. 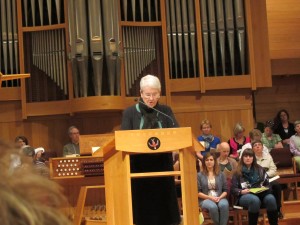 Here is one of her poems that she read that morning, so that you too can reflect upon it.

Here, take a look at this old nail. Rust

reddens it almost to the glow

into which it was once forged, hammered

over and over, in great heat.

We recognize its shape and use—

icon-ed by the furnace of centuries.

to halt the thrust and stumble

into wood hard as an old bone

or yielding as green fir.

I lift it in my hand to look, to test

its metal chill on my skin.

But still, in the mind it bites

through tendon-ed palm to solid beam

a vein to stain my whole being

with someone else’s blood.

The first plenary session was by Gary Schmidt, an English professor at Calvin College and the author of several books for children and young adults, including Lizzie Bright, The Buckminster Boy, The Wednesday Wars. His most recent book, Okay for Now, was nominated for the National Book Award. His address was entitled “Where the Servants Dwell,” and he started with a splendid recounting of the Naaman story, concluding with Naaman’s request to Elisha that he be allowed to accompany his king into the temple of Rimmon. Schmidt didn’t probe Elisha’s answer, but his talk was focused on the theme of the importance of addressing in our stories the questions that arise from complex situations. His address was a very finely crafted essay, satisfying to both mind and heart. 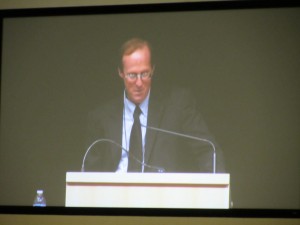 In the first time for concurrent sessions, I listened to Carey Wallace, founder of the Hillbilly Underground, an annual arts retreat, and author of the novel The Blind Contessa’s New Machine. She talked about “The Discipline of Rest,” something of which we are afraid, she suggested, although we long for it. She proposed that the will to stop work is almost as important as the will to start, and she told us of how she has learned to let a manuscript rest, after she has worked on it for a while. In her own experience, her best work as a writer has not emerged from thought but from rest, as gift rather than work. But “sitting still and undistracted is hard for us,” an observation that rings true for me too. Wallace posits that rest requires great strength and courage.

After the coffee break, I heard Larry Woiwode speak about “Pooling Metaphors Overflowing.” (He is the author of more than a dozen books, including the novels Born Brothers and Beyond the Bedroom Wall, and a recent memoir, A Step From Death.) I found him very interesting as he explored the centrality of metaphor in our lives. He argued that the medium of writing is metaphor, and that the act of writing is a metaphor, a picture of what we thought, which we put in words on paper to represent another world. Every writer, he suggested, acts in faith in the translation process from thought to word, aware that metaphors in language can hold their shape for centuries. But we need to be a servant to the metaphors we use, entering into their substance and letting them do their thing. We abuse them if we use them to impress, or if we do not use them specifically enough, a fault Woiwode finds common in writing about sex (illustrated, perhaps, in the work of John Updike). I was intrigued by Woiwode’s suggestion that TV is a peril in our culture because people take it as reality; they miss its being a metaphor. 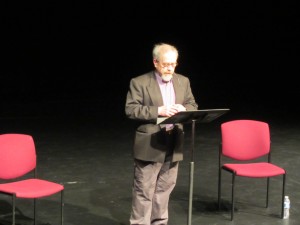 At the end of the afternoon, I heard Brian Walsh interview Bruce Cockburn, who also sang a couple of songs, which was a treat since we were not going to attend his concert that night, (it being after our bed-time!). Brian has recently authored Kicking at the Darkness: Bruce Cockburn and the Christian Imagination, and he has been studying Cockburn’s music for 30 years or so. I have previously heard Brian read a couple of academic papers on Cockburn’s work, as his study has proceeded. All of this reflection made Brian an excellent interviewer, and Cockburn was easy to interview because he was thoughtful, articulate and very willing to talk about his life and work. 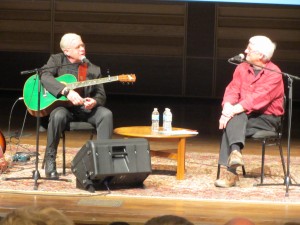 But I was most fascinated when Brian asked Cockburn what keeps him tied to Jesus. In response, Cockburn talked about the profound Christian experience he had in the 70s, while taking his first communion in a small Anglican church, receiving the body and blood of Christ. This was followed by a time during his wedding in that church, when he had so clear a sense of the presence of Jesus that he was almost visible. Cockburn testified to a deep desire for a relationship with God, but he noted that spiritual influences in his life have been very wide.

Cockburn’s theology is very eclectic, but I heard nothing to make me think that he has rejected Jesus. The disintegration of his marriage and his move to the city took him away from the Anglican Church in which he had become a Christian, and where he had grown in faith. He commented that the Christians he met after that were either liberals, whose Christian faith made no difference in their lives, or were radicals whose Christianity he found offensive. Since he did not expand on that, I don’t know whether these were poor representatives of Christ, or whether Cockburn was put off by the necessary “offence” of the gospel. He is aware that he is not a traditional Christian, but he averred that he might come back, and he expressed hope that he is “still on the way home.” It is beyond me to say just where he is in relationship to God right now, but I prayed for him as I listened. 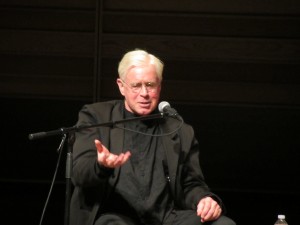 The plenary session that first evening featured Jonathan Safran Foer on “Reading Between the Lines.” He teaches in the graduate creative writing program at New York University, and he is the author of the novels Everything is Illuminated, Extremely Loud and Incredibly Close, and Tree of Codes. He recently edited the New American Haggadah. He was a fascinating story teller and he described, in a very interesting way, his life and work and the people who have influenced him. I was reminded of the statement by Charles “Tremendous” Jones, which I heard when I was a very young man, fresh in church ministry, but which has stuck with me since that time: “Ten years from now, you will be the same person you are today, except for two things: the books you read and the people you meet.” Hearing how this had worked out in Safran Foer’s personal development was fascinating. 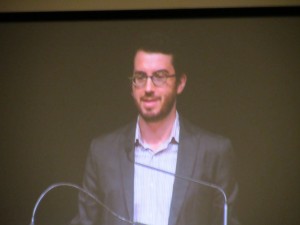 That first day was an excellent start to the conference, and we hit the hay well worn out but also thoroughly stimulated.

I really enjoyed this post, for the mention of familiar writers, and some that are new to me, but whom I will definitely investigate. Note taken, thanks.

An enjoyable description of a remarkably full day. The effort to say what kind of Christian one is always intrigues me. It is as if somehow we are the centre of the story, when we are minor characters indeed.

Thanks Terry for the reminder about poetry and especially the inclusion of this particular poem. Wow! Fantastic. I agree with you, I need to read more poetry and song. I’m working in Ephesians 2 this week, and it’s fascinating to think of the Lord as poet and newly created followers as the poems (workmanship).

Okay, so I have to leave one more reply. I really appreciated the brief reflection you gave on Larry Woiwode’s comments on metaphor. It is helpful to be freshly alerted to the extensive use of metaphor; especially so in Scripture. My creative, artistic side enjoys and appreciates metaphors, but as a pastor and teacher I am finding an ever increasing need to break down metaphors, interpret, and apply them. The danger is metaphors become code; or we even live metaphors (if that is possible) instead of ‘real’ authentic lives. Hmmm… dare I say, “food for thought?”

Good observations Garry. Yesterday John Stackhouse sent out the following tweet, which will resonate with you, I think.

“The price of metaphor is one of eternal vigilance.” (Norbert Weiner) Metaphors can make good companions, but bad bosses & awful spouses