I approached the second day of the festival with high hopes for a day as good as the first but it proved to be quite a different experience. That is OK. This is to be expected at conferences, and I got enough out of the day to make it still very worthwhile.

My disappointment with an early session was no fault of the presenter. John Sloan (a veteran editor who has worked mostly with Zondervan, and with some very fine authors) talked about “Finding and Feeding the Narrative Drive in Non-Fiction Writing.” I had looked forward to hearing things which would assist me to write theology in ways that make good use of narrative. The focus, however, was on writing biography and history, forms of non-fiction which are already intrinsically narrative in shape. This should not have surprised me, had I read the session’s description more carefully. In retrospect, I realized that it would have suited Gail better, given her occasional thoughts about fleshing out her extensive genealogical data base with stories about people in our family line. She did glean some help in that line from other sessions she attended.

Later in the morning, I went to a session in which four editors talked about “What Digital Publishing Can Do for You.” The participants approached the subject from different perspectives. Daniel Nayeri is an editor at Clarion books, and he has authored Straw House, Wood House, Brick House, Blow, novellas to introduce young adult readers to classic genres. Chris Park is a literary agent at Foundry Literary and Jana Riess is an editor with Westminster John Knox but has written several books, including Flunking Sainthood: A Year of Breaking the Sabbath and Forgetting to Pray, and Still Loving my Neighbor (named a top religion book of 2011 by Publishers Weekly). Elda Rotor is an editorial director at Penguin Classics and used to edit at Oxford University Press. So the panelists brought helpful expertise to their thoughts on the subject of the session.

Not surprisingly, it was an interesting session in which I heard much that was helpful, particularly since I have wondered recently about possibly doing some digital or paper self-publishing through an avenue such as Amazon. None of the presenters blanketly advised us not to self-publish, but they were helpful in describing what it can do for authors and where its limitations and pitfalls lie. Given what I heard, I am not now inclined towards self-publishing, unless I get something written that I think is genuinely worth publishing and am unable to find a traditional house to take it on. A session that closes a door can be as useful as one that opens a door, and of course the openings and closings are not necessarily permanent, particularly the way the whole publishing industry is evolving. These must be nerve-wracking times for people involved in it.

In the third session of the morning, Gail went to hear Ann Voskamp speak about “How to Write it So They Will Come.” She very much enjoyed Voskamp, who described her own spiritual life and her move into writing, first through blogging and then in book form. After lunch, we both went to the Chapel, to hear an interview session with Voskamp on the theme “Living Fully.” The session was superb, and Gail and I both resolved to sign on to her blog, A Holy Experience, and try it out for awhile.

Ann Voskamp writes for DaySpring and is a contributing editor to the website The High Calling. She is a prolific blogger and recently wrote the New York Times bestselling book, One Thousand Gifts: A Dare to Live Fully Right Where You Are. She is a home-schooling mother of 6 children, living on a farm which provides a good place for the children to learn how to work. She blogs because she loves to write, and she tries to get two hours a day (early and late) for reading and writing, in a little cabin her husband built for her on their property. I enjoyed her accounts of her life as a reader and writer, including her wondering to her husband once what it would be like to write when she is not tired, since she squeezes writing into the margins of a very full day’s schedule. She tries to read at least an hour a day, often late at night, four or five books at a time, and to finish the books she starts. 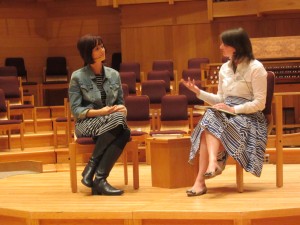 Most inspiring to us was Voskamp’s emphasis on the discipline of thanksgiving, which rings a note that has been drawn to our attention quite a bit in recent months. It is a discipline we would like to practice better, and her blog may be good inspiration in that regard. Voskamp noted that gratitude is not her own “default” position, so she writes as a fellow-traveller, not as a teacher. I liked her distinction between authentic lamenting and complaining, which entails distrust in God.

I attended a session in which Scott Hoezee (director for Calvin Seminary’s Center for Excellence in Preaching) dialogued with David Van Biema about the way in which a text influences people inside and outside of religious communities. They spent much of the time talking about their readings of Psa 139. It was engaging, particularly because of the different perspectives they brought to the biblical text. Van Biema was Time’s religion editor from 1998-2008 and his background is Jewish, but not of a very observant sort. He came to the Psalms particularly after the tragedy of 9/11, and he was initially taken aback by how harsh and honest the language of the Psalms is, and yet how often they take a turn of faith at the end. 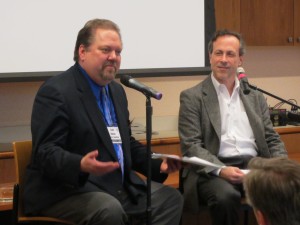 Van Biema has found the psalms of lament and imprecation particularly difficult, and he and Hoezee discussed this genre for a while. Van Biema observed that Jews don’t struggle with the imprecatory psalms in the way Christians do. They read them as a way of saying: “Look, God is on your side; your enemies are his enemies.” Hoezee, on the other hand, pointed out that, in the Christian reading, “God’s way is to let it all fall on his Son.”

I was intrigued at Van Biema’s response to a question about the Jewish thoughts about Christian reading of the Psalms. He observed that Jews are often not even aware that Christians have appropriated the Tehillim as their Psalms.

In the evening plenary session Marilynne Robinson (writer of three prize-winning novels, Housekeeping, Gilead, and Home) spoke about “Casting Out Fear.” Her address contrasted sharply with the plenaries of the other two evenings. Where those were finely crafted literary essays, Robinson’s talk was more political in tone. Perhaps it was more in the genre of prophetic warning and exhortation than of literary analysis and artistic construction. She is concerned about an increasing normalization of fear in American culture. She believes that religion has a deep human base and that religious people have more in common with one another than with non-religious people. But she is troubled that people are being educated in a way that causes them to marginalize themselves, through biblical ignorance and a sense that religion is not respectable, that it is under threat. She sees this as different from the perspective of old Calvinists who had the serenity of deeply Christian people. But fear is addictive and it normalizes itself, so that American Christians are now huddling in “psychosocial bomb shelters.” 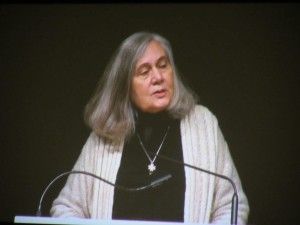 As an American, Robinson is concerned about what she dubbed “patriotic enmity,” the talk of national decline. She does not believe that America is actually in decline, but she warned that decline is accelerated when a culture thinks that it is in decline. We had difficulty relating to her concerns and concluded that much of this might have been the result of our being Canadian, and hence not a part of the context which Robinson was addressing with her prophetic call. (Perhaps readers of this blog who were at the session, or who have heard Robinson speak of these concerns on other occasions, can illuminate for me what was on her mind that night). If nothing else comes from the session for me, it will  be nice to have a face and voice in mind when I read her writing.

You may want to chase the ideas of patriotism and decline as a part of your own theological thinking. As we discussed at breakfast recently, I see the effort to identify with a larger entity as an essentially positive move, in sharp contrast to a primary drive in our North American cultures to place the individual at the centre of everything. Blind patriotism is destructive; love for country (along with the love for all things in their proper place) is, I think, good for country and good for the individual involved.