In our final day of this year’s Festival, I enjoyed more excellent sessions. The first of these was by Shane Claiborne (author of The Irresistible Revolution: Living as an Ordinary Radical, and co-author of Jesus for President: Politics for Ordinary Radicals and Common Prayer: A Liturgy for Ordinary Radicals), speaking on the theme: “Alive in the World: Stories of God’s Revolution.” It was very inspiring to hear what God is doing through people who are following Jesus in radical ways and ministering to the needy and the marginalized. In addition to speaking of their work in the community in Philadelphia, Claiborne talked about his time in Calcutta with Mother Theresa, and a trip to Iraq in 2003, in which he was blessed by the hospitality of Iraqis, particularly a group in Rutba, after some of his group were seriously injured in a car accident. That encounter resulted in the establishment of Rutba House in Durham, S. Carolina, which focuses on ministries of reconciliation. Claiborne closed with a video by Mark Weaver, which described another inspiring example of radical following of Jesus.

Among Claiborne’s stories which stuck with me were the following:

In a quite different way, I enjoyed a session on “The Writer as Reader,” in which Kevin Brockmeier (whose books include The Brief History of the Dead, The Truth About Celia, and The Illumination),  Bethany Pierce (an artist and novelist whose debut book, Feeling for Bones was named one of the best religious books of 2007 by Publishers Weekly), and Carey Wallace (author of The Blind Contessa’s New Machine) discussed the importance of reading for their own writing and made suggestions for us to better our own reading habits. 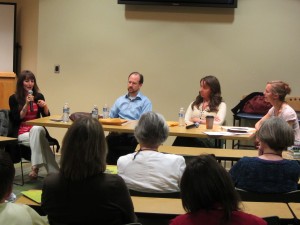 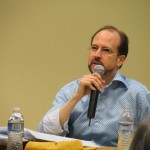 I was particularly intrigued by Brockmeier’s comment that he reads very quickly and writes very slowly, so that his writing time has to be carefully scheduled. He advised that we not read to write, just read whatever interests us, but he thinks that rereading relevant books can be useful when we are into a writing project. 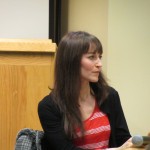 Bethany Pierce likes to analyze books to see how authors have done something that she particularly wants to do better. But, in the discussion, panelists agreed that when a writer does something particularly well, it seems impossible to discern how they did it.

I found  Paula Huston’s session both informative and inspiring, speaking directly to my work at this point in my life. She is the author of The Holy Way: Practices for a Simple Life, Forgiveness: Following Jesus into Radical Loving, and Simplifying the Soul: Lenten Practice to Renew Your Spirit, and she is currently working on Pilgrim Heart, the story of her solo round-the-world spiritual quest. That sounds like a fascinating book. She spoke about “Writing as Spiritual Practice,” unpacking the similarities between the disciplines needed for both writing and spirituality. She also spoke about the virtues necessary for writers to fulfil their vocation and the vices that impede it. 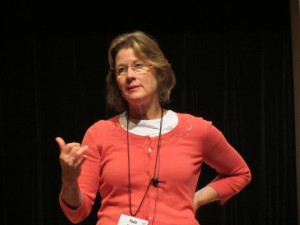 Huston grew up as a devout Lutheran, but then she spent 20 years outside the church and the life of faith. Through the Camaldolese monks (a Benedictine reform order), she grew back into Christian faith. From them, she learned that we are formed by habits and that good Christian habits are best formed in community, through living graciously together.

Huston posits that writing life and spiritual life both require solitude, and she goes to the monastery for two or three days when she is starting a writing project. Both ways of life also need long focused times, and neither offers front end rewards, so it feels as though the rewards come with punishments. Both spiritual life and writing require us to step outside normal cultural boundaries, and both teach us to listen – to God and to others. During the years in which Huston lost spirituality, she continued to write, and found that her writing disciplines prepared her to come back to faith.

I enjoyed Huston’s comments on the spiritual virtues that need also to characterize our writing.

There are also vices about which we need to beware as writers.

Spiritual practices which will help us as writers include the renunciation of whatever gets in the way, whether these be indulgences or distractions. We need daily manna, ingestion of whatever feeds us. In particular, we need to become mystics, in what Karl Rahner called “ordinary mysticism,” the practice of the presence of God.

The final plenary address was by Nigerian writer, Chimamanda Ngozi Adichie, who spoke about “The Magic and Craft of Fiction.”  It was a very well crafted presentation from a relatively young but obviously highly gifted author, who described writing as magic because of the possibility of joy that it brings. 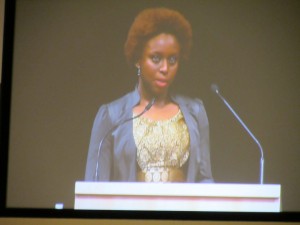 That concluded this year’s Festival, but it left us eager to return for the next one in 2014, Lord willing.

Greetings Terry. Thank you for writing these summaries of your time at the festival. I was transported, albeit for a short time, into another world of interests and dialogue. I especially appreciated the session with Bruce Cockburn, and I was challenged by Claiborne. Wow, what an interesting few days…

“Ordinary mysticism”. A wonderful phrase! Perhaps the imagination that leads to a revival service followed by eight hours of meditation in a Philadelphia church grows out of such ordinary mysticism.