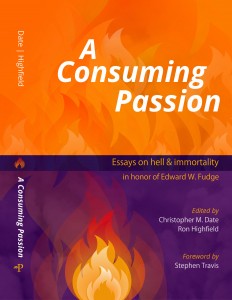 I just got word from the editor that a book to which I contributed a chapter is soon to come off the press from Wipf and Stock, under the Pickwick imprint, which is their primary academic venue. I look forward to reading the other essays, because it looks like a very worthwhile collection – good authors on interesting topics. I am happy to have a small part in honoring Edward Fudge, a lovely and godly man, and a fine scholar who suffered considerably for his pursuit of truth.

In his blog post about the book today, Chris Date gives us the table of contents, and it promises to be an eschatological treat.

Jon Zens, “Are You Going to Heaven?” A Journey Away from the Wrong Question”

Rob McRay, “Moses, Jesus, and Fudge: How Edward Fudge (and Biblical Theology) Changed What I Preach About Hell”

Nicholas Quient, “Paul and the Annihilation of Death”

Adam Murrell. “Divine Sovereignty in the Punishment of the Wicked”

Claude Mariottini, “The Punishment of the Wicked in Isaiah 66:24”

Kim Papaioannou, “Death, Eternal Life, and Judgment in the Gospel and Epistles of John”

Glenn A. Peoples, “The Future of Hell”

Ralph G. Bowles, “The Offer of Life: Conditional Immortality in the Practice of Evangelism”

David C. Cramer, “How to Talk about the Afterlife (If You Must): Ten Theses to Guide Debates among Traditionalists, Conditionalists, and Universalists”

Once the book is in my hands, I expect that I will devote some blog posts to its contents.

One reply on “Forthcoming: “A Consuming Passion””

Thank you for your participation in this Festschrift, Terry, and thanks to all who contributed to it and who helped bring it about. I am honored by the association with each one! – Edward