N. T. Wright devoted a large proportion of his massive tome, Paul and the Faithfulness of God, to the relationship between the church and Israel, and he argues for a total replacement, what is often dubbed “supersessionism.” Larry Hurtado posits that Wright is correct on a couple of very important points: 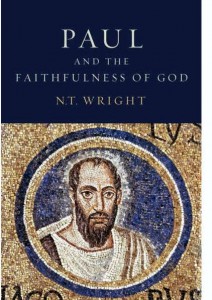 Repeatedly, Wright takes the view that Paul saw one family of Abraham, one redeemed people as the outcome of God’s redemptive work in/through Jesus.  Wright argues against those who propose that Paul held a “two covenant” theology, such as offered by Pamela Eisenbaum (in her book, Paul was not a Christian, HarperOne, 2009).  On both these counts, I think that Wright is correct.  I agree that for Paul Jesus is now the eschatological mediator of salvation and that Paul regarded a refusal to confess Jesus as Christ and Lord (by Jews or gentiles) as spiritual blindness and disobedience to God (e.g. 2 Cor 3:12–4:6).

But Hurtado argues that, contrary to Wright’s proposal, the church does not replace Israel so completely that ethnic Israel is no longer significant in God’s fulfillment of his covenant made with Abraham. I’ll not say much more about my own views, but I want to cite a lengthy selection from Hurtado’s excellent post on this very important topic. He restates Wright’s position:

Now the notion that ethnic Israel has lost its former significance in God’s purposes and that the church has inherited all that once was attached to the people of Israel is a venerable Christian one, going back to the second century or so.  But the question I have is whether Paul shared this view.  I don’t think so.

Wright knows that this sort of view is often labelled “supersessionist” and he strenuously denies the charge.  In his scheme, it isn’t so much that Israel is simply cast aside.  Instead, Wright refers to a “reworking” of “Israel” in Paul.  Briefly, here is how this works.  First, he claims that ethnic Israel was called by God for the purpose of bringing God’s revelation to the world.  Indeed, Wright repeatedly claims that Israel was chosen by God to be the vehicle of redemption.  This is crucial in Wright’s argument.

Second, Wright claims that Israel failed in this calling.  Instead of opening out to the world and bringing God’s revelation to it (Wright contends), Israel grasped its chosen-ness selfishly.  Israel/Jews held themselves aloof from gentiles (he says) priding themselves in their elect status and so failing in their elect purpose.

Jesus (in Wright’s view) took up the baton, however, and fulfilled Israel’s responsibility in his own obedient life and death.  ”Israel” (as the elect people) effectively became a status/calling that shifted onto the shoulders of the one Jew, Jesus.  (This actually reminds me of Cullmann’s “salvation-history” scheme, but Wright doesn’t acknowledge any similarity.)

And then Hurtado explains why he thinks that Wright is mistaken in his way of framing this matter.

But, to consider the Pauline data, I don’t see any evidence that he saw Israel as having failed in the way that Wright alleges, that Israel failed in bringing redemption to the world, that Israel’s problem was keeping God for herself.  In fact, the only references in Paul to a failure on the part of ethnic Israel that I know of are references to a refusal to recognize Jesus as Messiah and Lord, a failure to embrace the gospel.  This seems to be the gist of 2 Cor 3:12–4:6, where Paul refers to Israel (fellow Jews) as having a veil over their eyes, preventing them from recognizing “the glory of the Lord.”  And in Romans 9–11 as well, Paul grieves over the refusal of the main body of fellow Jews to recognize Jesus as Lord, referring to them as having “stumbled” over the gospel (e.g., 9:32: 11:11), and as “hardened” (e.g. 11:7, 25).

That is, ironically, in Paul’s view it was the appearance of Jesus and the preaching of the gospel that produced any failure on the part of Israel.  The failure was specifically to refuse to acknowledge Jesus as God’s new eschatological revelation, and in this way their “zeal for God” is “not according to knowledge” (Rom. 10:2).  So, I don’t see anything in Paul that supports Wright’s grand narrative of the national failure of Israel that Wright posits.  And that means that I see no basis in Paul for Wright’s notion that Jesus assumed the role and responsibility of Israel.

To my view, when Paul refers to Jews he means Jews, and when he refers to “Israel” he means his fellow Jews in their identity before God.  So, despite Wright’s extended effort to make his case that in Romans 11:25-26 the Israel afflicted with a “hardening” (v. 25) was the ethnic body of Jews, but the “all Israel” that Paul says will be saved (v. 26) is the church, I am unpersuaded.

I reiterate that one of the reasons that Wright takes his view of matters is that he thinks that the unity of the family of Abraham in Paul’s thought requires a uniformity, a homogeneity, with no continuing significance for Jews as such in God’s plan.  It’s clear that for Wright his reading of Romans 2:25-29 is crucial to this notion that the oneness of the people of God cannot accommodate a continuing ethnic entity of “Israel”.  Indeed, a check of the index of references shows that these verses are by far the most frequently cited in the two-volume work, indicative of their place in Wright’s thinking.

Wright takes Paul here as saying that the term “Jew” no longer has an ethnic meaning, that gentiles who observe God’s law from their heart are in fact the true Jews.  I tend to see these verses, however, in the context of the preceding material (Rom. 2:17ff.), where Paul rhetorically addresses fellow Jews to emphasize that their ethnic identity means little unless they obey God, and that the true Jew is one who acts accordingly.  Mere ethnic identity isn’t enough, says Paul.  But these verses hardly seem to me to justify Wright’s sweeping notion that for Paul “Jew” and “Israel” no longer held their traditional ethnic connotations.

So, as I’ve indicated in a previous posting a few months ago, it still seems to me that Paul holds out the divine secret (“mysterion“) that the present, distressing (to him) situation of the main body of fellow Jews (their refusal to acknowledge Jesus, a “hardening”) will not ultimately prevail against God’s purposes.  Instead, when God’s present purpose with gentiles has been completed (the “pleroma“/’fullness’ of the gentiles,” Rom 11:25), God will then obtain the corresponding “pleroma” of Israel as well (11:12), and “all Israel” too will be “saved” (11:26).  Having consigned all (Jews and gentiles in their turn) to disobedience, God will show mercy to all (in their turn, Rom 11:32).

This isn’t a “two covenant” notion such as Eisenbaum espouses (Jesus the redeemer of gentiles, and Torah the salvation of Jews), for Paul seems to me to have held that all must come to God via Jesus.  But (as I see it) Paul did continue to see the family of Abraham, the full company of the redeemed, as comprised of believing Jews (such as himself) who remained Jews, and gentiles who remained gentiles.  To be sure, their respective identities were to have no negative impact upon accepting one another, for they were all “one in Christ Jesus” (Gal. 3:28).  But along with that oneness there remained (for Paul) the significance of “Israel” as fellow Jews, who were (as he saw it) heirs of divine promises (Rom 9:4-5).  Although at present, most of his fellow Jews were “enemies” (so far as concerns the gospel), they were, nevertheless, “beloved” by God, whose gifts and calling were irrevocable (11:28-29).

I can remember a time when classic Dispensationalism stood largely alone in its resistance to replacement theology. I disagree with their “two people” understanding, which is fundamental to their pre-tribulational rapturist eschatology, but theirs was not a two covenant theology like Eisenbaum’s. Largely through the influence of George Ladd, early in my theological formation I came to believe that God still has (at least) spiritual purposes to fulfill for ethnic Israel. These have not been supplanted by the breaking down of the dividing wall between Jew and Gentile in the church, a wall which will not be rebuilt, as it seems to me classic Dispensationalism proposed. Now I am delighted that non-Dispensationalist scholars with the expertise of Larry Hurtado have refused to board the large supersessionist train.

One reply on “God is not finished with ethnic Israel: Hurtado’s response to Wright”

Fantastic post!
Could you advise me on some of the non-Dispensationalist scholars that don’t go along with supersessionism that you mentioned in the bottom of your post please? Via email if thats ok.
Neil