“It’s a small world,” we often say, as when we get glimpses of the intricate web of connections through which God works graciously in the world. We got one of those glimpses this morning, in communication from my wife Gail’s brother Murray Robinson, who has recently returned from a ministry trip with Tim Challies, in north India. Murray sent us a video clip which triggered a flow of memories. 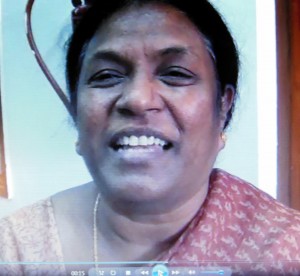 That video contained a message from a woman Murray met in a church in Delhi, and she was the daughter of B. A. Prabhakar, so I want to tell you a story.

The family of B. A. Prabhakar 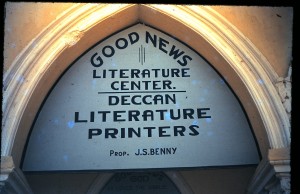 In the 1950s, my father was instrumental in getting a literature ministry started. It became the Good News Literature Center, in Secunderabad, Andhra Pradesh, South India.. 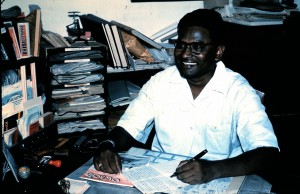 Some of the literature produced was instrumental in the conversion to faith in Christ of B. A. Prabhakar, and he traveled to  Secunderabad to meet the people who had produced the literature. Later, he left a secure, well-paying job (with the Railway, as I recall) to work with the Christian literature ministry. It was there that most of my memories of Brother Prabhakar (as I was taught to call him) were formed. 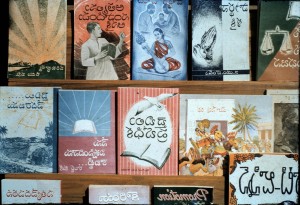 For much of the year, I was away at a British boarding school, a 3 day train ride up to Ooty, in the Nilgiri Hills. But we had a long vacation at Christmas time and, during my weeks at home, I spent many hours over at the book store, running errands for my father or helping get material shipped out. I remember particularly the mailing of a gospel newspaper produced periodically, and of Christian books which were sent out to people who had joined a book club. (My apologies to Telugu readers. From the one English title I see that this slide was scanned backwards.) 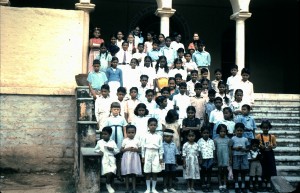 Brother Prabhakar became the first Indian pastor of the church that was planted in connection with the Literature Center, a fact of which his daughter reminded us in the video clip sent by Murray. Here is a shot of the Sunday School children, from the 1950s.

After I had finished high school, my family left for furlough, and a lovely goodbye celebration was organized by J. S. Benny, the printer whose business thrived with the help of the Literature Center. Below is a picture taken at that celebration. 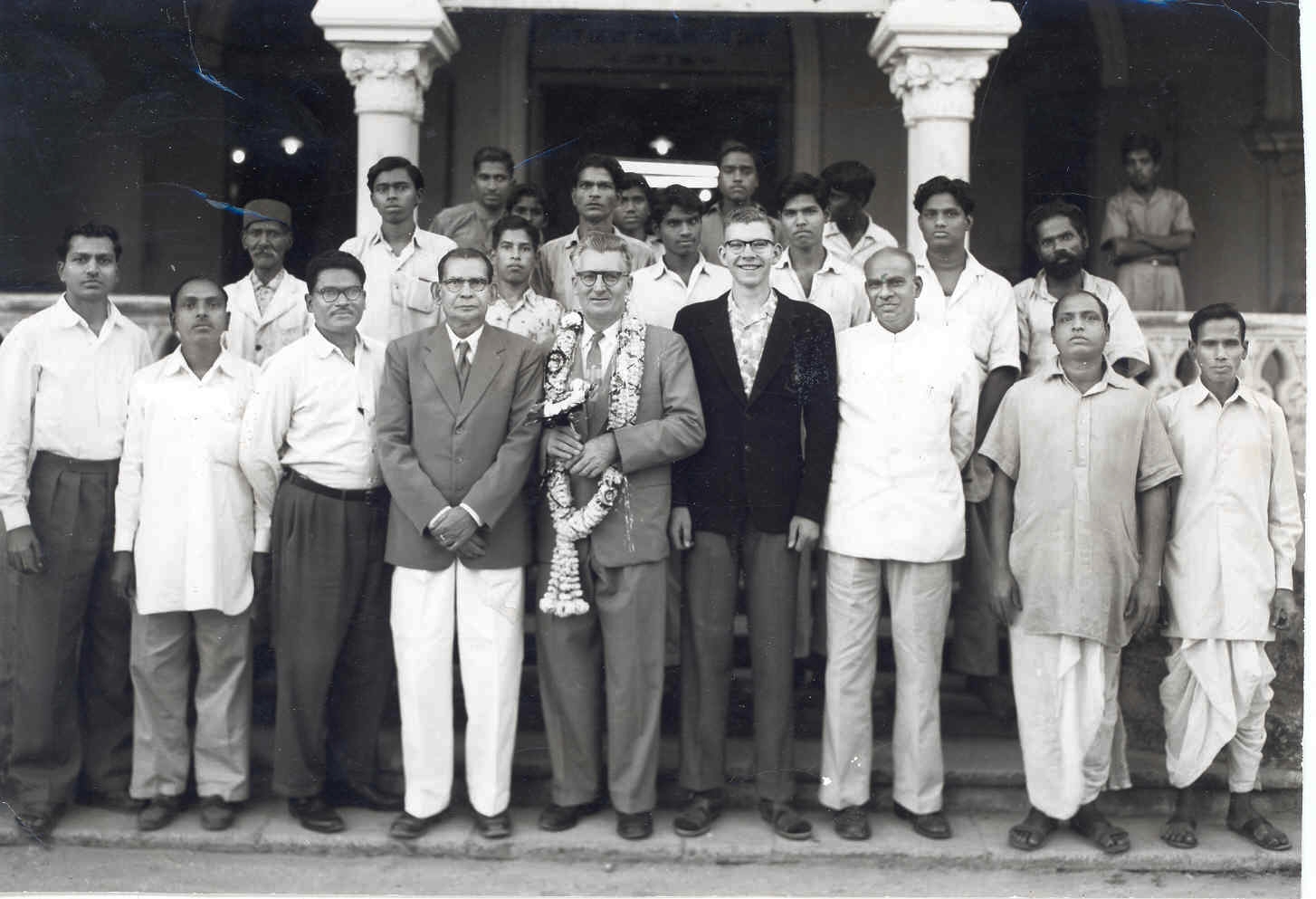 My father is the garlanded man in the middle and I stand happily at his left hand. On his right is J. S. Benny, the printer, and next to him is B. A. Prabhakar, a significant part of the literature work and pastor of the church. The rest of the people in the picture were employees of Deccan Literature Printers. 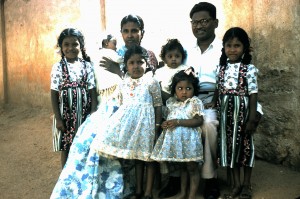 In my parents’ collection of pictures, I found this one of Brother Prabhakar’s family. One of these lovely girls will now be the woman whom Murray met at the church in Delhi. She says that my father dedicated all seven of the children, so it looks as though the seventh one had yet to be born when this picture was taken.

In 2007-08, 48 years after I had left Secunderabad, I was able to return to India with my 3 sisters, and to show Gail where I had grown up. The building in which the literature center operated in my childhood was destroyed some years ago, but the ministry goes on, in smaller quarters, as the Good News Book Centre. We were very happy to pay it a visit. 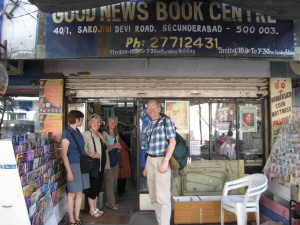 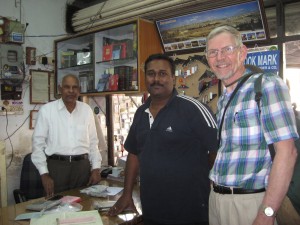 Adding to the “small world” dimension of Murray’s ministry trip to North India was that he went on from Delhi (where he had met Prabhakar’s daughter) to Lucknow, and there he ended up being hosted in the home of Prabhakar’s granddaughter (whose mother Murray met in Delhi)! This young woman’s husband is a fine pastor in Lucknow, and he translated for Tim and Murray during there visit there. Here are pictures of shots in the small video shot in their home (since I can’t get WordPress to run video for me). 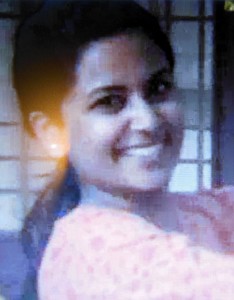 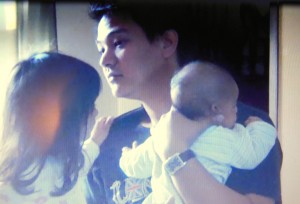 So the work of God’s grace goes on through the generations and it is delightful to see its effect. 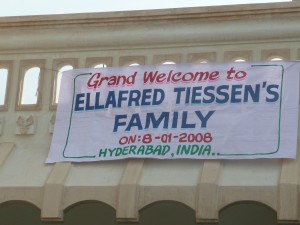 This incident reminded me of another story from our 2007-08 trip to India. We spent a lovely day in Ghatkesar, near Hyderabad when we were invited to the home of Eunice Richard, where we were greeted royally.

Eunice is the daughter of one of our ayahs as we were growing up. Her mother’s parents had planned to marry her to a Hindu woman, but my parents interceded on her behalf and were able to keep that marriage from happening. Eventually, Eunice’s mother married a good Christian man, and Eunice was told this story as she grew up, making her immensely grateful that she was blessed to be raised in a Christian family. She recalls that her family would pray for my parents’ family every day. 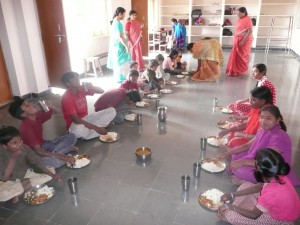 Eunice is now widowed but she has a ministry to children whose parents are in prison. Here are some of them eating lunch. These ones were home from school that day because they put on a very nice program for us.

Eunice lost touch with our family and wanted to get reconnected. She sometimes attended conferences of Prison Fellowship, and whenever she met anyone who had  a connection with India, she would ask if they knew Fred Tiessen. Finally, at one of these meetings in the U.S, she ran into Bob Crow, who had been a fellow missionary with my parents, and Eunice was able to get in touch with them.

On the day that we visited, we were served a lovely lunch after the children had put on their program. During that time, as the son of Fred Tiessen’s family, I was asked to come forward and to give a brief message, which Eunice translated. After this, she placed a shawl over my shoulders in blessing. It was a touching moment for me. 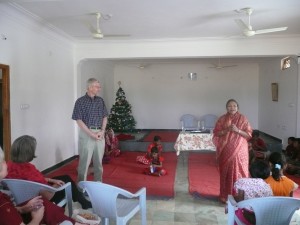 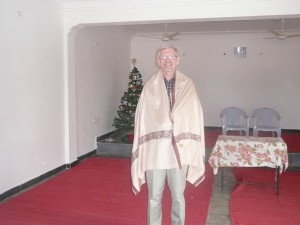 As happened this morning when we received Murray’s video, my visit to see Eunice’s ministry stirred within me a great sense of gratitude for what God did in India through my parents, and for the way in which God’s grace is being mediated to the lives of many others, through descendants of those to whom my parents had been a blessing.

At the farewell celebration for my parents in 1960, we were given a plaque by the family of B. A. Prabhakar. For many years it hung in the home of my parents, and I loved it for its memories and for its message. When my mother (now 101) was wanting to pass along some of her things to us children, that plaque was an item that I was particularly happy to receive. It now hangs in our dining room, and its message represents beautifully just what I have described in this post. 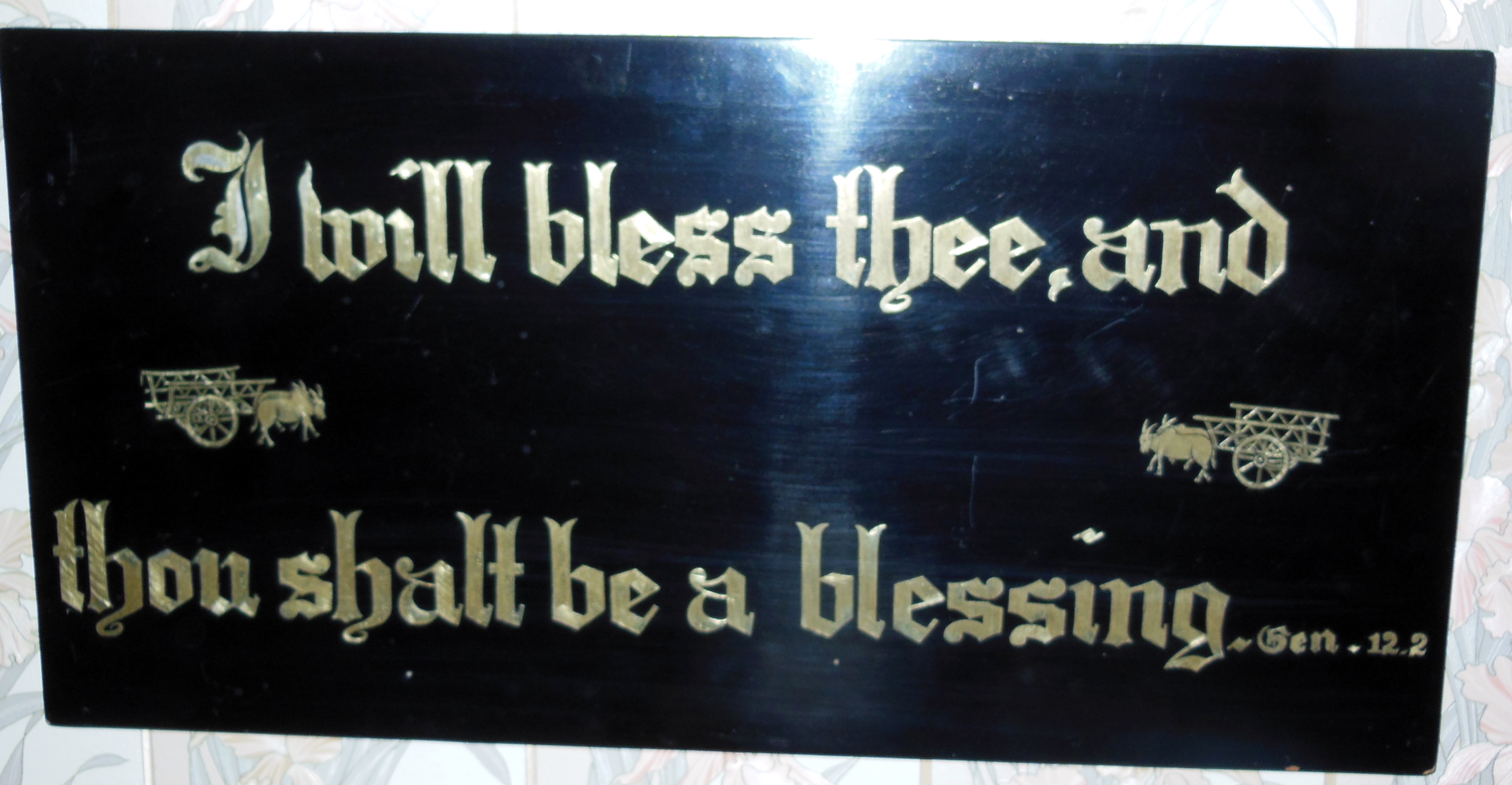 This prayer of Brother Prabhakar’s family for my parents has been answered, and we still see that blessing spreading.

What an amazing story of God’s grace! Thanks for sharing this beautiful story.