Calvinists put a great deal of emphasis on the grace of God. What makes our theology problematic to many synergists is that we frequently preface God’s grace with the adjective “sovereign,” to indicate that God has the right to be gracious to whomever he wills and, since by definition no grace is “deserved,” no one has ground to complain about how God treats them. What is often not apparent to synergists, who are distressed by the particularity of saving grace in Calvinist soteriology, is how very gracious God is to everyone, including the non-elect. Admittedly, all God’s grace serves to increase the guilt of those who reject it or who take it for granted, but this does not diminish the intrinsic goodness of the kindness God shows to all undeserving sinners.

These thoughts were triggered by statements from the writings of David Millar (1687-1757) concerning “grace to the reprobate,” in 1731. Millar was doubtless aware of the scandal about the uneven distribution of grace by God which is explicit in the Calvinist understanding of salvation, and apparently he also thought that the greatness of God’s graciousness toward the non-elect was insufficiently appreciated by critics of Calvinism.  He wrote: 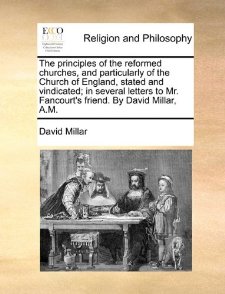 We [the Calvinists] make not God the Author of Sin, say not that he made Men to damn them, or that they are destroyed of mere Pleasure. We say not, that God hinders the Non-elect from doing all the good they can and will, that he gives them no Grace, that he refuses to hear the importunate Cry of the humble, the weary, the thirsty Sinner, or ever casts off the Believing and the Penitent. We believe that though God has not elected all Men, yet he gives more help to every one than he was obliged to give to any; or, than any one ever yet improved, as they might and ought. Yea, we think that he often gives more Grace to the very worst of the Non-elect, than Pelagians and Arminians can be brought to believe he gives to the Elect themselves. They can’t endure to hear of Grace that conquers and determines the Will, but will have all Grace subject to it; whereas we believe that he often gives Grace to the Reprobate, which of itself is effectual for some good Purposes, which it would never have been, had it not powerfully of unwilling made them willing. (David Millar, The Principles of the Reformed Churches, And particularly of the Church of England, Stated and Vindicated; in Several Letters to Mr. Fancourt’s Friend (London: Printed for the Author; and Sold by A. Millar, at Buchanan’s-Head, against St. Clement’s Church in the Strand, 1731), x. Cited in a post by Tony Byrne.)

Few beliefs held by Calvinists seem more scandalous to non-Calvinists than the doctrine of unconditional election, which necessarily entails the belief that people can only be saved if  God effectively enables them to believe and that God does not give this enablement to everyone. Those who reject this doctrine are necessarily committed to the belief that God distributes his grace universally with complete even-handedness.

Initially, I had phrased that highlighted sentence this way: “God distributes his saving grace universally . . ..” When I spoke of “saving grace,” I had in mind only the particular work in which the Holy Spirit regenerates spiritually dead sinners, enabling them to believe. Such a restriction might seem necessary to Arminians, who affirm “universal prevenient grace,” because I find that many Arminians grant that God’s beneficent providence is not evenly distributed. They have a sufficiently robust view of God’s general governance of the world that they do not exclude from God’s control in the world all matters of personal history. That I was born in Canada has put me in a situation where I receive many good things that make my life easier and longer than that of much of the world’s population. Something as simple as potable water comes to mind, but the many other comforts that I enjoy by virtue of living in Canada, through no merit of my own, are experiences of a better world, a world closer to the shalom God originally intended for his creation than many people can even imagine.

Certainly, there are synergists who specifically remove God from these details; I called them “semi-deists in Providence and Prayer. But classical Arminians reject the notion that God is that uninvolved in ongoing care for his creatures. They affirm what Calvinists call “common grace,” which is, by definition, not specifically saving grace. As soon as I had written about an uneven distribution of saving grace, however, it struck me that the line between common and special/saving grace is one that we are unable to discern. Paul asked the Romans: “do you despise the riches of [God’s] kindness and forbearance and patience? Do you not realize that God’s kindness is meant to lead you to repentance?” (Rom 2:4). These acts of kindness and patience that Paul speaks about surely include many of the good gifts God gives to people who are never saved. They therefore fall into the category of “common grace,” within a Calvinistic understanding. But God can use these gifts savingly. In his general providence, he can even use the lack of such gifts savingly, which may be evidenced by the fact that the poor and powerless often respond more readily to the gospel than do the rich and powerful (cf., 1 Cor 1:26).

So, from the Calvinist perspective, all undeserved kindnesses from God, all his gifts of grace, are potentially instrumental in leading people to the gratitude of faith. God’s mighty acts of creation, accessible to everyone in the world, ought to prompt people to honor God as God and give him thanks (Rom 1:21), which I take to be the faith response which would please God in such instances. As part of God’s universal self-revelation, these works of God are a common grace, which no sinner deserves, and those who fail to be appropriately reverent and thankful to God are justly condemned for that failure.

Why do some give God thanks and others not? Calvinists hear the Bible to teach that this is because God does an additional work of grace in some people’s hearts and minds, but not others. Within the context of Arminianism’s universal prevening grace, however, the difference in response is attributable completely to the actions of individuals. God has made everyone able to see him as Creator and to be thankful for his gifts of creation, but some choose not to. Yet, given that God’s good gifts are contributors to human repentance and faith, must even these not be distributed evenly, if unconditional election and efficacious divine calling are to be avoided? How robust a doctrine of providence is really coherent with a synergistic soteriology?

2 replies on “God’s great grace to the non-elect”

This is an interesting subject. It seems the discussion takes up an observation from the middle of the story, making it more difficult. Considering the ordo salutis, if there are elect suffering in a fallen world where evil abounds, isn’t the judgement on the non-elect already given. It is not a developing process to see what they will do in order that they would be judged. It is a forbearance of sentencing that has already been pronounced. And, what if this forbearance is not so much for the sake of those condemned, but rather for those who the Lord calls to life in Him — that they all would be collected to their Shephard, that none would be lost.

It is interesting to note what was said to Christ in the country of the Gergesenes. “What have we to do with You, Jesus, You Son of God? Have You come here to torment us before the time?”

Sentence and time of service pronounced.