Some time ago, I spoke about the aha experience I had, while leading an evangelistic Bible study in the home of a Roman Catholic family, when I first began to ask myself whether it is possible to be justified by faith if one does not know that justification is by faith. That came back to me tonight as I read a delightful post by Justin Taylor, “How much doctrine can one distort or deny and still be saved?” You can follow the link if you want to read his whole piece, by one item I enjoyed was this quote from the great Puritan theologian, John Owen: 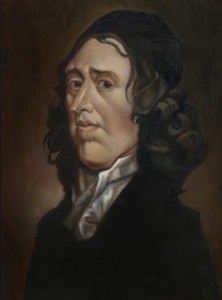 Men may be really saved by that grace which doctrinally they do deny; . . . and they may be justified by the imputation of that righteousness which in opinion they deny to be imputed. (The Doctrine of Justification by Faith Alone in Owen’s Works 5:163-64)

In the same vein, more extensive but similarly delightful, were these thoughts from Jonathan Edwards:

How far a wonderful and mysterious agency of God’s Spirit may so influence some men’s hearts, that their practice in this regard may be contrary to their ownor how far they may believe the doctrine of justification by men’s own righteousness in general, and yet not believe it in a particular application of it to themselves—principles, so that they shall not trust in their own righteousness, though they profess that men are justified by their own righteousness—

or how far that error which they may have been led into by education, or cunning sophistry of others, may yet be indeed contrary to the prevailing disposition of their hearts, and contrary to their practice—

or how far some may seem to maintain a doctrine contrary to this gospel-doctrine of justification, that really do not, but only express themselves differently from others;

or seem to oppose it through their misunderstanding of our expressions, or we of theirs, when indeed our real sentiments are the same in the main—

or may seem to differ more than they do, by using terms that are without a precisely fixed and determinate meaning—

or to be wide in their sentiments from this doctrine, for want of a distinct understanding of it;

whose hearts, at the same time, entirely agree with it, and if once it was clearly explained to their understandings, would immediately close with it, and embrace it:—

how far these things may be, I will not determine; but am fully persuaded that great allowances are to be made on these and such like accounts, in innumerable instances; though it is manifest, from what has been said, that the teaching and propagating [of] contrary doctrines and schemes, is of a pernicious and fatal tendency. (“Justification by Faith Alone,” in Yale’s Works of Jonathan Edwards 19:242.)