Like Louis McBride, I have often pondered this question, and I like the perspective he has cited from Joel Green’s book on Conversion in Luke-Acts. 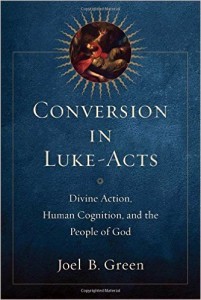 Again, this approach to the question takes as its point of departure the consequences of a particular approach to the human situation: What is the human ‘problem’ that needs to be addressed? A more helpful point of entry takes the phenomenological route of describing how conversion is conceptualized and experienced. Conversion studies emphasizing social-psychological or sociological approaches in the last two or three decades have drawn attention to different aspects of the conversion process on the basis of their attention to agency. Accordingly, Brock Kilbourne and James Richardson propose an analytical scheme based on the agency assigned to the convert, whether passive or active. Conversions in the former case are viewed as largely determined by outside forces, whereas the latter are viewed in terms of life choice. When conversion is understood in passive terms, ‘the individual is conceptualized as a passive recipient of personality changes and life experiences. Whether psychologically disposed or situationally tempered, individuals’ conversions are considered determined, in large part, by impersonal and powerful forces acting upon them, within them, or both.’ Such conversions are typically sudden and dramatic, as in the case of what is for Kilbourne and Richardson the prototypical passive conversion: Paul’s so-called Damascus Road experience. When conversion is understood in active terms, converts are portrayed as ‘seekers, or individuals who actively make plans, choices, and decisions, and generate many of their life experiences.’ Such conversions are often understood in terms of “process” rather than ‘event,’ with ongoing transformation occurring as the individual learns his or her role as a convert. Converts might experience their conversion in terms of either perspective and could possibly recount their conversion according to the script provided by both approaches. The downside of this way of formulating the experience of conversion is that it might lead us to choose sides when sides ought not to be chosen. Rather than taking seriously the explanatory value of both perspectives, we might imagine that they stand in tension with each other (when, after all, each provides a perspective from which to engage in analysis), as though the one emphasis necessarily excluded the other. (Italics his. pp. 133-34)