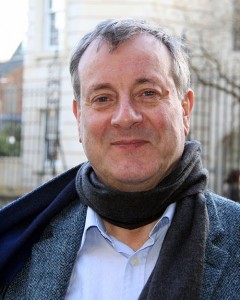 I have very much enjoyed listening to Alister McGrath’s Parchman Lectures at Truett Seminary (Baylor University). His three lectures were entitled:

“Why reason isn’t enough: The “Big Picture” of faith.”

“Seeing things in a new way: grace and the transformation of vision.”

“Wonder and Meaning: Why faith engages the imagination, not just reason.”

McGrath makes a fine case for Christian Theism, and I particularly  appreciated his doing this in post-modern style. He critiques the new atheism, particularly addressing the work of Christopher Dawkins, and he points out that Dawkins’s approach is very modernistic. McGrath thinks that this is a reason why the new atheism is not very effective. The days of enlightenment rationalism that characterized modernism are done in the western world, and so McGrath posits that a Christian apologetic which continues to argue in a rationalistic manner is not likely to be persuasive to young people in our time.

McGrath was himself an atheist in his younger years as a scientist, and so he brings his personal experience of conversion to Christianity to his argument against atheism. He has been very much helped by C. S. Lewis, and I think that McGrath’s lectures are examples of the perspective that Lewis himself described, and which McGrath quotes:

I believe in Christianity as I believe that the sun has risen: not only because I see it, but because by it I see everything else.

Working in that mode, McGrath argues for Christianity on the two grounds which post-modernists value: 1) Christian theology is internally coherent. It all hangs together beautifully. 2) The Christian worldview makes best sense of what we experience in life, and it most powerfully offers hope in the midst of the often difficult circumstances we face in this world.

McGrath also stresses the power of imagination in conceptualizing truth and in presenting it. He is certainly not an irrationalist, but he suggests that reason is not enough to commend Christian faith in our context. I recommend his lectures to you.

One reply on “McGrath’s post-modern apologetic for Christian Theism”

I like much of what I’ve read from McGrath. When I was reading a lot of books by atheists promoting atheism, I would often read a Christian book to counter each atheistic one. For example, “God is Not Great” by C. Hitchens (one of the least convincing books I’ve read promoting atheism) was accompanied by his brother’s book “The Rage Against God.” “The End of Faith” by Sam Harris went along with “The End of Reason” by Ravi Zacharias. And of course, McGrath’s book (that was written with his wife) “The Dawkins Delusion?” went along with “The God Delusion.” I appreciated it’s brevity, tone, and reasoned arguments.