Learning, like riches, may add to usefulness, when sanctified. But, like riches, it exposes to snares and temptations; it is hard to have it without trusting in it. (John Newton)

In recent decades there have been numerous expressions of concern about anti-intellectualism among evangelicals these days. Mark Noll’s 1995 book, The Scandal of the Evangelical Mind, is one that comes quickly to mind, but he has not been alone in sounding the alarm. When we think of the large influence upon today’s “evangelicalism” of the Pietist movement of the late 17th and early 18th centuries, it is not surprising that suspicion about learning should be widespread in the evangelical consciousness. We value the early Pietists because they recognized the aridness of rationalism and called the church to holiness of life. Many of those early Pietists, however, were also people with significant educational attainments. Their desire was not to diminish the importance of education but to ensure that it did not stifle humble and holy living, in daily obedience to Christ.

The Fundamentalist movement in 20th century American Christianity was another Pietist uprising. Many of those leaders were, like the early Pietists, well educated, but they were distressed at the subversion of revealed truth by rationalism, skepticism, and an over-estimation of the importance of being respected by unbelievers. They had seen orthodox Christian educational institutions, which were established for the training of godly leaders for church and society, turned into places that endangered the personal faith of students and fostered the spread of unorthodox theology in Protestant denominations. Unfortunately, the Liberal-Fundamentalist controversy led to the removal of orthodox academics from many respected academic institutions, and the process fostered deep mistrust of education itself, in the minds of many of the minimally educated lay people in the churches that fled liberal denominations into new denominations.

Fundamentalism is a movement that continues within evangelicalism, but most of the evangelical movement headed in a different direction, through the impetus of what was dubbed “neo-evangelicalism” in my student days in the 1960s. It is within that segment of the evangelical movement that the anti-intellectual spirit is most strongly decried. I am very much a child of that neo-evangelicalism, having subscribed to Christianity Today when I was just 19, around which time I also joined the Evangelical Theological Society, and having been nurtured by the writings of Carl Henry, but also by the evangelistic zeal of Billy Graham, who has often bemoaned his own lack of education and has encouraged serious learning.

Within evangelicalism, the tension between anti-intellectualism and the longing for academic respectability persists. The risk that rationalism presents to humble faith is as real as the risk offered by anti-intellectual ignorance to solidly ground faith that is both holy and active in the world in which the church lives, and to which it is called to bring the good news (evangel) of Jesus. We need to pursue truth vigorously and fearlessly, confident that “all truth is God’s truth, as Arthur Holmes loved to remind us, but to value God’s wisdom more highly than mere knowledge.

These are thoughts that were triggered in my mind this morning, as I read John Newton’s letter to John Ryland Jr., written on March 26, 1791 (“Letter Fifty,” in Grant Gordon ed., Wise Counsel: John Newton’s Letters to John Ryland, Jr., p. 243). Baptist pastor Robert Hall had died a few weeks previously, and he had been “a close friend and valued pastoral counsellor to Ryland Jr.” (Gordon, 240). After some very interesting remarks about what Newton considered a proper attitude to the death of a faithful brother like Hall, Newton said to Ryland: 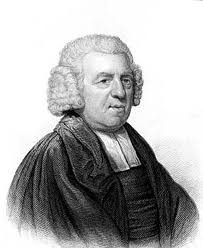 “I wish Mr. Hall’s mantle might fall upon his son, who otherwise, with all his learning and cleverness [he had an M.A. from Aberdeen], will fall short of his father. I am not without apprehensions. that academical learning may, in time, have such effects among the Baptists, as it has already had among some other denominations, and open the door to scepticism. Learning, like riches, may add to usefulness, when sanctified. But, like riches, it exposes to snares and temptations; it is hard to have it without trusting in it.”

In these words of Newton, I heard concern about the tension I have been speaking about. So our problem is not new. But the remedy that Newton proposes is worth pondering.

There is no school like the school of the cross. There men are made wise unto salvation; wise to win souls. In a crucified Saviour are hidden all the treasures of wisdom and knowledge. And the tongue of the truly learned, that can speak a word in season to them that are weary, is not acquired, like Greek and Latin, by reading great books; but by self-knowledge and soul exercises. To learn navigation by the fire-side, will never make a man an expert mariner. He must do his business in great waters. And practice will bring him into many situations, of which his general theory could give him no conception.

May God bless his global church, in our time, with women and men who are rich in the theoretical learning that comes only through much hard work, but who are also well trained in “the school of the cross,” rich in “self-knowledge and soul exercises,” people who are like Newton’s “expert mariners,” seasoned with experience in the great waters of life and ministry.

2 replies on “On the value and risk of learning”

You know of course that this is the theme of our day of prayer tomorrow — not in just these words, but clearly reflecting the dynamics you describe. Newton’s quote is worth taking with me to that setting.

Actually, I didn’t know that Daryl, but I am happy to sync with your day’s theme.