Craig offers . . . a tendentious analysis that leaves the most difficult and important questions unaddressed (Paul Helseth, 101).

The theory of middle knowledge was supposed to rid the world of fate and chance while preserving human freedom. To accomplish this task, however, it limits God’s freedom and subjects him to a kind of fate worse than the one from which it supposedly liberates human beings (Ron Highfield, 120). 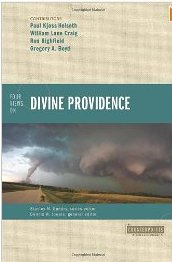 Having reviewed William Lane Craig’s Molinist model in Chapter 2 of  Four Views on Divine Providence, we will consider the responses of the other three members of the conversation.

Paul Kjoss Helseth, is disappointed that Craig does not give us “an extended argument that carefully anticipates the potential questions” of non-Molinists (101). Among those questions are (101-04):

Helseth deems Craig’s method “theologically reckless” because it “moves not from the text to philosophical speculation but from philosophical speculation to the text” (106). Craig’s biblical argument falls short, in Helseth’s estimation, because it fails “to establish that Scripture unambiguously affirms, if not middle knowledge itself, then at least what middle knowledge presupposes, namely, the existence and biblical givenness of libertarian freedom” (107).

Most significant for Helseth is his conviction that Molinism robs God of his “Godness” in two ways: it makes God “dependent on what free creatures would do in counterfactual circumstances” (112), and it identifies the strongly sovereign God of the Augustinian-Calvinist account with Satan, because he “does not conform to their standards or govern in a way that aligns with their moral sensibilities” (113).

Ron Highfield complains that the theory of middle knowledge robs God of his essential divinity because it rejects God’s absolute independence, or aseity (115), and because its tendency to rationalism makes it unable “to imagine that God creates and rules the world from a position so transcendent that the very same action by which he controls the world also liberates it into the freedom of the children of God” (117). Highield proposes that “Molinism faces a significant, even fatal, problem” in regard to God’s selection of one world from among the virtually infinite feasible worlds which God could have actualized. It seems to Highfield that the infinitely wise God must “possess an idea of his preferred world, the world he would realize if he faced no constraints.” In the terms of Molinism, however, if there happened to be a feasible world that conformed perfectly to God’s ideal, this would “not demonstrate God’s ‘breathtaking . . . sovereignty’ but his good fortune” (119). But God does not “get so lucky” in the Molinist theory because Craig considers this only the best feasible world, not the best possible one (120).

Highfield criticizes Craig’s theodicy because “the best Molinism can guarantee is that good outweighs evil. It cannot assure us that even in the best feasible world, all evil will be turned eventually to the service of good” (122). Furthermore, it is “of little comfort to tell ourselves that it was not God’s fault” (122).

Boyd concurs with Craig “that the Calvinist account of providence cannot avoid making God responsible for evil,” and that “simple foreknowledge offers God no providential advantage and undermines the meaning of foreordination,” but he finds “some of his arguments against the open view as well as many of his arguments supporting Molinism to be weak and in a few instances seriously flawed” (123).

In regard to Craig’s presentation and critique of the open view, Boyd objects to the label “revisionary open theism,” since there is no established position (124). Boyd denies Craig’s claim that some open theists hold that God knows only logical possibilities prior to creation, and that any of them doubt that God can make contingency plans prior to creation (124). He corrects Craig’s assertion that open theists deny the truth of all “would” counterfactuals before creation, because the only ones “that we would argue are necessarily false are those that purport to express future libertarian free actions” (124). Boyd also rejects the claim that Hasker’s definition of omniscience as the ability to know all that is knowable is typical of open theists, since many hold, instead, “that propositions about future contingents have no truth-value until agents resolve possibilities one way or another,” while others (including Craig) “argue that all propositions about future contingents, including ‘might’ propositions, have a truth value that God knows” (124).

Like Helseth and Highfield, Boyd finds Molinism’s metaphysical dualism gravely objectionable, in positing “an eternal yet contingent reality alongside God that God neither chose nor created” (131). On account of the grounding objection to knowledge of “would” counterfactuals if creatures are libertarianly free, Boyd asserts that God can only know conjoined “might” counterfactuals of creaturely free actions. The latter “express what it means to have libertarian freedom,” but they avoid the grounding objection (133).

Craig posits that “Molinism conceives of every possible world in terms of a single, exhaustively settled story line,” but open theism embodies “multiple possible story lines” (133), and this has distinct practical advantages because of the “significance and responsibility the open view places on us” (134).

Boyd responds to Craig’s four objections against the Molinist conception of God as master chess champion who is assured of victory.

My reflections on the responses offered to Craig

As per my conversation with Paul Helm (which appeared in WTJ, and to which Helseth refers [107]), I agree with Helseth that God’s knowledge of counterfactuals is natural, not middle, since creatures are not libertarianly free. Like all three of the respondents to Craig (102, 130-33), I find the grounding objection persuasive: counterfactuals of libertarian freedom have no truth value, so that Molinism is philosophically incoherent. If Craig is correct, as I think he is, that Scripture clearly teaches that God does know counterfactuals of future creaturely action, then humans do not have libertarian freedom. Consequently, I concur with Helseth that it is the compatibilist account of the relationship between moral character and moral activity (rather than the Molinist scheme) which is “essential to understanding the ‘staggering assertion[s] of divine sovereignty over the affairs of men’ that are found in passages like Acts 2 and 4” (111).

I concur with all three of the respondents (112, 115, 131) that Molinism diminishes God’s sovereignty by making him dependent on eternal realities (counterfactuals of libertarian creaturely freedom) independent of God, as they would be if the Molinist account were correct.

I agree with Craig that a conceptualist view of God’s foreknowledge avoids the problems that Calvinists discern in perceptual views, but I agree with Highfield that Craig’s consistency, in also understanding God’s knowledge of counterfactuals of creaturely freedom conceptually, is problematic because it gives those truths eternal status independent of God (unlike the truths God knows naturally or freely) (115). I also commend Highfield for his astute analysis of the problems that arise from the Molinist distinction between possible and feasible worlds, both with respect to God’s sovereignty and in regard to theodicy.

I believe that Boyd would be correct in his case for the independent truth status of conjoined “might”-counterfactuals, that is of statements concerning what might or might not be (126-28), if creatures were libertarianly free and the grounding objection were  valid. Thus, his correction of Craig’s mistake in collapsing “might” counterfactuals into “would” counterfactuals is right and is important, but I posit that it is not, in fact, the case that there are “logically possible worlds in which God knows the future partly as a ‘maybe’,” because creatures are not libertarianly free. I agree with Boyd that, within an open theist framework, “‘might’ counterfactuals constitute a distinct category of propositions alongside ‘would’ counterfactuals, which an omniscient God must know prior to the creation of the world” (130).

Although I commend Boyd for his fine demonstration that Craig is in error in regard to “might” counterfactuals, as they function within an open theist framework, I do not think that it would be anywhere near as helpful to God to know “might” counterfactuals as Boyd proposes. I expect that we will return to this matter when Boyd’s own proposal is on the table, so I won’t expand on my reasons for this now.

Questions or matters of nuance

Highfield complains that, in Molinism, “the truths of middle knowledge determine what sort of world God can create” (116). I have expressed my agreement with his concern as it applies to middle knowledge, but I wonder what he would say about my appropriation of John Feinberg’s “integrity of humans defense” regarding evil (No One Like Him, 787-95). Feinberg demonstrates that the compatibilist freedom which God has given moral creatures offers more constraints than libertarians (and probably many compatibilists too!) generally realize. Feinberg asserts that there is “reason to believe it may be harder for God to get us to do right than we think. . . . It might turn out that God would have to constrain many people to do things he needed done in order to organize circumstances to convince a few of us to do the right thing without constraining us. Of course, that would contradict compatibilistic free will for many of us, and would do so more frequently than we might imagine. Moreover, one begins to wonder how wise this God is if he must do all of this just to bring it about that his human creatures do good. Why not at the outset just make a different creature who couldn’t do evil? But of course, that would contradict God’s decision to make humans, not subhumans or superhumans” (790) (see point 8 of “My compatibilist proposal”).

Since it is some years since I read Boyd’s books, I was surprised to hear him describe libertarian freedom as irrevocable, which leads him to deny so strongly that God could intervene in situations of evil. Not all open theists take that position, but it does strengthen Boyd’s theodicy.