I listened to an mp3 conversion of the video from the National Catholic Prayer Breakfast recently, and I enjoyed it very much. You can watch it here:

This year’s guest speakers were his Eminence Cardinal Sean O’Malley of Boston and Robert P. George of the United States Commission on International Religious Freedom. This prayer breakfast, now in its 10th year, grew out of the Vatican’s concern for the reevangelization of the west, where secularism has had devastating effects on the faith and practice of many western Catholics and on the life and ministry of the church. Accordingly, both speakers spoke very forthrightly of the need to be faithful to the gospel. I particularly appreciated Robert George’s speech, in which he emphasized the claims of the gospel upon believers in connection with the life of the unborn and with biblical (heterosexual) marriage and family. These are two issues in which the religious freedom of American Christians is being very seriously threatened by their own government and courts.

George described how the situation has changed for American Catholics. Many Catholics can remember a time when being Catholic in largely Protestant America was a costly faithfulness to Christ. Their position in society at all levels, and sometimes even their employment, was often restricted because of their Catholic religion. That changed significantly to the point where John F. Kennedy was elected as the first Roman Catholic president of the US, and also the first President not to have been chosen by a majority of the Protestant vote. Life in America became much easier for Catholics and many enjoyed and took advantage of that freedom to practice their faith publicly. But secularism has changed the situation for Catholics as it has for Protestants.

Once again, it has become costly for Catholics to follow Christ. I think it probable that for faithful Catholics it has become even more difficult than it was when the restrictions came from Protestants. Now faithful Catholics and biblically conservative Protestants are in the same position, and this has drawn them closer together. I was encouraged to hear George speak of Protestants as fellow members of Christ’s body, and to hear him state that Protestants recognize this of Catholics as well. What he may not be aware of, however, is that this is not uniformly true among evangelicals, where I still often hear people speak of “Catholics and Christians,” as though these were exclusive categories, or hear the assumption that Catholics are not “saved.” Speeches like that given by Robert George and Cardinal O’Malley at this breakfast can help to break down those perceptions, if evangelicals are prepared to watch or listen to them. I do not deny that significant doctrinal differences still exist between us, but I know that God saves people by grace through faith, not through doctrinal correctness. One can be justified by faith, without understanding clearly the biblical teaching concerning justification (by which I mean, of course, the classic Protestant understanding of that doctrine, even in the forms it is nuanced by evangelicals who appropriate some of the “New Paul” studies).

In the wake of Vatican II, and then particularly of the charismatic renewal within Catholicism, I have been very much encouraged by what I see God doing in the lives of many Roman Catholics and of their church. The visibility of the oneness of the Christian church is important to me, and I understand why some evangelicals have become Roman Catholic, to be part of the largest body of Christians, unified under one bishop. I appreciate the long history of orthodox confession of the early creeds, which has been maintained within the Roman Catholic Church, and the care with which the Vatican guards its orthodoxy through vigilance regarding the theology of its teachers. I am grateful for their extensive and costly missionary work in taking the knowledge of Jesus to many parts of the world. Theologically, I stand on the shoulders of centuries of great theologians in the western church before the Reformation, and I have learned from the piety of many whom the Roman Catholic Church regards as “saints.” But for all this, there are reasons why I remain Protestant.

Reasons why I remain Protestant

My primary sticking point in regard to Roman Catholicism is the infallibility of the pope and the claims of apostolic succession of which the primacy of the Bishop of Rome is most significant. I cannot give the allegiance to the Roman Catholic magisterium which is demanded of faithful Catholics. But I was reminded of another area of discomfort as I listened to the prayer breakfast, one which I feel regularly when I read papal encyclicals or the work of faithful Catholic thinkers. I can find myself agreeing with them and feeling a sense of Christian fellowship and then suddenly being thrown off by statements about the saints or the church. It is in those moments that I am reminded of why I can not imagine ever being able to join the Roman Catholic Church, no matter how messy evangelicalism becomes.

As I listened to the prayer breakfast, I had a sense of dissonance rather early in the event during the introductory remarks by the MC. As he described the roots of the prayer breakfast, I felt good about its goal of contributing to the reevangelizing of nominal Catholics in the  west. We very much need to pursue that same mission within evangelical churches. But it was not long before mention was made of the significance of the recent canonization of popes John XXIII and John Paul II whose blessing was invoked. This was followed by a reminder that the breakfast was convened on the feast day of Our Lady of Fatima, who was identified, at least once (as I recall), as patron saint of the breakfast. That fact was mentioned again by both Robert George and Cardinal O’Malley, and in later invocation of intercession by Our Lady of Fatima. This pinpointed for me an area in which my Protestant convictions always rise in protest, the sort of gut level concern that I experienced during my years in the Philippines, as I watched processions or acts of veneration of the saints, which I believed to be at grave risk of becoming idolatrous.

I find no biblical ground for asserting that believers who have died are now engaged in intercession for us who are still alive on earth, and particularly none for assuming that they hear our prayers to them, requesting them to intercede on our behalf. I commented once to an evangelical Anglican friend who is sympathetic to the intercession of departed believers as part of the “communion of saints,” that if I believed in this I would pray to my father. He was a fervent prayer warrior during his life here, and I can think of no one now with Christ who is more keenly interested in my well being. I would be delighted to learn that he still prays for me and that he is attentive to my requests to him that he intercede to God on my behalf. I often asked for his intercession while he was on earth, and I would be happy if I could still do that, now that he is even more free to devote himself to intercessory ministry. But I don’t try to send him prayer requests now because I have no reason to believe that it would be effective. I am also concerned that if I did believe him to be an effective intercessor on my behalf, who could hear my requests to him for that intercession, I might be distracted from the clear biblical instruction to draw near to the throne of grace with confidence, because I know that I have, in Jesus, “a great high priest who has passed through the heavens,” one who is able to sympathize with my weaknesses because he was tempted and tried in all the ways I am and yet he did not sin (Heb 4:14-16). That was never a risk when he and I  were both on earth, but now he is with Christ in a more intimate way, though I am sure he longs for the consummation of Christ’s work, as I do.

In principle, I don’t think that the doctrine of the intercession of departed believers is dangerous. But much of what I have seen of its practice is deeply troubling. Listening to invocations of Our Lady of Fatima, I was puzzled by a phenomenon that had not struck me before in this way – the multitude of feast days for Mary, in connection with geographical sites. 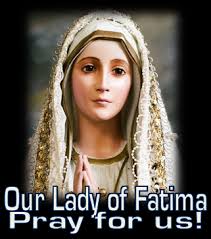 A quick Google search for “feast days of Mary” turned up the following locations in which Mary is honored as “Our Lady of . . .”: Lourdes, Mt. Carmel, Walsingham in England, and Guadalupe. There are probably others, because “the feast of Our Lady of Fatima” was not even on that list, but elsewhere, I read that a feast day on May 13 was “approved by the local bishop in 1930” and “was added to the Church’s worldwide calendar in 2002.”

I understand how these designations come about. At each of these sites, people had prayed for Mary’s intercession, or even directly for her assistance, and they had experienced what were widely acknowledged within their church as miracles. In some places, Mary appeared to them with messages, as purportedly happened at Fatima. But what, I wonder, is going on when the intercession of