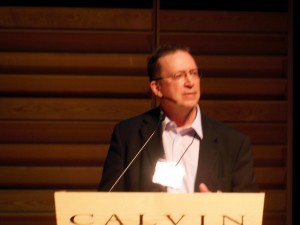 Last Friday, at the Festival of Faith and Writing held at Calvin College, Cornelius Plantinga Jr. preached an excellent sermon during the Vespers service, which was itself beautifully designed. He described quite elaborately the way our bodies work when attacked by a virus, countering it with antibodies and, after defeating it, building antibodies to guard against its return. From this process, vaccinations have been developed against these viruses. These are  then injected into people, giving them a small dose of the illness, which in turn stimulates the vaccinated people’s bodies to produce their own antibodies, immunizing them from later getting a serious case of the disease. Plantinga then drew an analogy between that process and the way in which the atoning death of Christ through which he overcame death, when appropriated by the faith of a believer, brings about a participation of the believer in Christ’s death. We experience the death that is the penalty for sin, in small measure, but in that process we are, in a sense, immunized from the awfulness of the second death and are raised with Christ in the resurrection to life at Christ’s return.

I hope I have restated Plantinga’s analogy accurately, because I thought it captured very nicely the manner in which we are united with Christ in death to sin and thereby also united with him in the grand resurrection from the dead. I enjoyed the sermon very much, and I have been pondering Plantinga’s illustrative analogy in light of the dispute between Roman Catholic and Protestant understandings of the manner in which Christ’s righteousness brings about the believer’s justification.

Discussions between Roman Catholic and Lutheran theologians, and in meetings of participants in Evangelicals and Catholics Together, have considerably advanced our understandings of one another’s doctrinal intentions. It is clear that both parties wish to affirm that justification is by grace through faith, that Roman Catholic participants did not wish to imply that the works of the believer, which are enabled by the infusion of Christ’s righteousness and necessary for final justification, undermine the graciousness of that justification, and that Lutherans and evangelicals did not wish to communicate that the good works which God produces in the lives of justified believers, through the Spirit of God’s work of sanctification, are unconnected to God’s justifying grace. But it does not appear to me that the classic difference has been overcome between the Protestant understanding of justification as a forensic imputation of the righteousness of Christ and the Roman Catholic understanding of justification as an infusion of the righteousness of Christ, graciously enabling believers to do works which are meritorious in their final justification.

As I pondered Plantinga’s analogy between vaccination and union with Christ in his death, I wondered if some might think it risky because it may be thought to suggest that the righteousness of Christ is infused into us, in a way that compromises the important distinction between the saving operations of justification and sanctification. I suggest that this risk is avoided if we place the analogy within an understanding of salvation that has union with Christ at its center.

In the wake of new perspectives on Paul, evangelicals have had their own in-house discussions of justification, debating whether  the righteousness of Christ is imputed to believers for their forensic absolution from guilt or whether “justification” is a statement about membership in the new covenant community. I am not convinced that 16th century Reformers were wrong in the ways that enthusiasts of the new perspectives have proposed, but I have appropriated from that discussion the language of incorporated righteousness as the most helpful way of describing what occurs in justification. For some time prior to the evangelical discussions of Paul’s theology of justification, I had been dissatisfied with Luther’s language of “alien” guilt and alien righteousness which informed his statements regarding imputed guilt and righteousness. Given my Reformed understanding of the covenantal framework within which all of Adam’s descendants became guilty in Adam, and in which all who are united with Christ by faith are declared righteous in him, I prefer the language of incorporation to that of imputation. Nevertheless, I remain convinced that the New Testament doctrine of justification is not a belief in our final justification on the ground of our own righteous deeds graciously enabled by the infused righteousness of Christ.

With incorporation as our framework for understanding the manner in which we became guilty in Adam and can become righteous in Christ, I suggest that Plantinga’s analogy between vaccination and the believer’s salvation in Christ is a helpful way for us to conceptualize our justification. I thank God that by my dying with Christ and rising again with him to new life, I have been delivered from the guilt and power of sin and death, metaphorically “vaccinated” against the disease of sin which culminates in God’s final judgment upon sinners. As we approach Good Friday and Easter Sunday, I have a new mental picture to feed my gratitude for what Jesus accomplished on our behalf, which saves all who place their faith in him.