Apparent theological differences often derive from differences in the way individuals or groups are using the same terms, rather than in substantial theological disagreement. Once lines have been drawn and division has resulted from that perceived theological disagreement, however, it becomes extremely difficult to bring about reconciliation and fellowship in mind and heart. With this in mind, I was encouraged by what I read in the  latest report from Bonner Querschnitte, entitled “Landslide changes in the Catholic Church and in global Christianity.” Thomas Schirrmacher, the Chair of the Theological Commission of the World Evangelical Alliance had given a guest lecture at Westminster Theological Seminary, and this is the statement that caught my attention, in the report of that meeting: 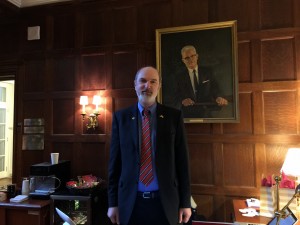 Schirrmacher used the full acceptance of wrongly so called ‘monophysite’ churches, such as the Coptic, Syriac-Orthodox or the Armenian-Orthodox Churches, as example of doctrinal convergence. In the light of modern research and intra-church discussions, the Monophysitist and Chalcedonian positions appear to differ mainly in their usage of the key term ‘nature’, not in what they actually confess about Jesus or see as a summary of Biblical doctrine.

This issue of the role of terminology in perceived theological disagreement had been on my mind recently, as I read an article about the controversy over whether Christ had one or two “wills,” the dispute between monothelitism and dyothelitism. Largely through the influence of Maximus the Confessor, the sixth ecumenical council (Constantinople III 680/81) affirmed “a difference of nature . . . in the same one hypostasis by the fact that each nature wills and works what is proper to it, in communion with the other.” Maximus and dyothelites, following his lead, associated “will” with nature and so they asserted only one will in the three persons of the Godhead, so as not to disrupt the unity of the divine nature. But they therefore posited two wills in the Son, when he assumed human nature, so that he could redeem it. (The West had also taken Maximus’s direction in the first Lateran Council [649].)

I have never been inclined to monophysitism, so I have always affirmed the Definition of Chalcedon and found it helpful. But for some years now, I have been a monothelite, and hence out of step with these early church decisions. This has not troubled me greatly, because I had also concluded that I did not disagree substantially with the theology informing the church’s way of speaking. I simply doubt that it is a formulation that communicates well in our own setting. As we commonly use the term “will,” it is connected with a person, not a nature. Hence I think and speak of the Father, Son and Spirit as each willing with their own personal wills, but always willing in complete agreement and harmony.

In John 6:38, Jesus says: “I have come down from heaven not to do my own will, but the will of him who sent me.” Clearly, Jesus is speaking of two wills, the wills of the Father and of Jesus, who came to do the Father’s will. From the “orthodox” dyothelite perspective, where will goes with nature, Jesus could only have been speaking of his human will. So the Son came not to do his human will but the divine will, which is to say, not just the will of the Father, but the divine will of the Son. So the eternal Son became a man so that his human will might do his divine will. To westerners in our time, this surely sounds like Nestoriananism (or two personhood), as though there were not two natures in the one person, as Chalcedon asserted, but two persons, since it is persons not natures that will, according to the way we usually understand and use that term.

The potential conflict between two wills is most intense in Gethsemane, where Jesus asks his Father to “let this cup pass” from him, if possible, even as he reaffirms that he wants what the Father wants (Mt 26:39). In my view, there is no conflict between the will of the Son and the will of the Father, but this is a relationship between two persons within the Godhead, not a potential struggle between the two natures of Jesus, as though he was asserting his commitment to submit his human will to his divine will.  I see no benefit in making this a conflict portrayed as between the human and the divine wills of Jesus. To speak in those terms is only to create confusion. The Word had become flesh and, in the vulnerability of that flesh was now subordinating his own human fears in obedience to the Father’s will, but this was part of his lifelong commitment always to do the Father’s will (Jn 8:29). The harmony between the persons of the Godhead was never in doubt, but in his authentic human experience as the second Adam, the Son shrank from the horror that lay ahead of him. He was about to suffer representatively the wrath of God against sin in death, the penalty which God had stipulated to the first Adam, millennia before.

I have affirmed the two natures of Christ, so I have certainly had no difficulty with Chalcedon, but I do not subscribe to Constantinople III in terminology, though I am confident that I do not disagree Christologically  with the leaders of the church who formulated that dyothelite statement. I’ll be very happy if Christians can officially reach the conclusion that this is precisely the situation also between Chalcedonian orthodoxy and the formulations of “monophysite” churches.

One reply on “Theological disagreement or a difference in the use of terms?”

I found “The Lost History of Christianity” by Phillip Jenkins to be a very interesting read. It describes the history of the Nestoriansvand Jacobites after they separated from what became the Roman Church. While, as you have noted, our understanding of their doctrine of Christogy may not agree with our confessions, I can’t help but think that there we many in those churches who trusted in Christ and we therefore our brothers and sisters in Christ.