Was virginal conception necessary for the incarnation? 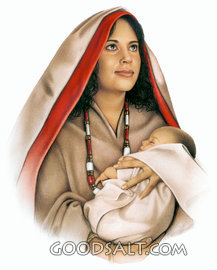 As Christmas approaches, the birth of Jesus from the virgin Mary is very much on our minds, so this is a good time to think about the reason for that virginal conception.

In a recent blog post, Louis McBride raises the question “Do we lose the incarnation if we deny the virgin birth?” He observes that that, “for many this would seem to be a no-brainer,” but his brief post was stimulated by Andrew Lincoln’s new book Born of a Virgin?: Reconceiving Jesus in the Bible, Tradition, and Theology. Lincoln “makes it quite clear that the incarnation is a ‘non-negotiable element,’” but he doubts that the incarnation of the Word necessitated that Jesus be virgin born, and he posits that “the virgin birth of Jesus is the minority tradition while an alternate tradition is more prevalent.” I found that statement surprising but have not yet read Lincoln’s book so I’m in the dark about the support he provides for this statement.

My own interest, in this post, is not whether Scripture attests that Jesus was born of a virgin, which I do not question, but whether the incarnation required virginal conception and, if not, why God chose this means.

The virginal conception was not necessary for the Word’s incarnation

I recall being taught that the virgin birth was essential to the incarnation, but I concluded otherwise quite a few years ago. I did not reach my conclusion alone, which would make me nervous, but I am aware that it is still somewhat surprising for many evangelicals, for whom a major reason for defending the virginal conception of Jesus is the assumption that his deity required it. Louis McBride expresses his own surprise when Andrew Lincoln doubts this necessary connection and cites Pope Benedict XVI, who obviously believed in the virginal conception but who wrote:

According to the faith of the Church the Sonship of Jesus does not rest on the fact that Jesus had no human father: The doctrine of Jesus’ divinity would not be affected if Jesus had been the product of a normal marriage. For the Sonship of which faith speaks is not a biological but an ontological fact, an event not in time but in God’s eternity. (Lincoln, p. 18; quoted from Introduction to Christianity, p. 208; emphasis mine)

Before Benedict stated his opinion that virginal conception was not necessary for the Word to take humanity upon himself, a number of evangelical theologians had said this too. Stanley Grenz wrote: “Jesus’ deity and his virgin birth appear compatible; they even seem to be related somehow. Yet there is no necessary movement from the latter to the former.” Rather, “our affirmation of Jesus’ deity rests on the Master’s claim as confirmed by the resurrection” (Theology for the Community of God, 419). Grenz argued that the “early apostolic proclamation never appealed to the virgin birth as providing the necessary foundation for the declaration that Jesus is divine,”  nor is the incarnation presented in the New Testament as dependent on the virgin birth (419).

It should have been possible for Jesus to have two human parents and to have been fully the God-man nonetheless. To insist that having a human male parent would have excluded the possibility of deity smacks of Apollinarianism, according to which the divine Logos took the place of one of the normal components of human nature (the soul). But Jesus was fully human, including everything that both a male and a female parent would ordinarily contribute. . . . Some have called [the concept that there could have been an incarnation without a virgin birth] “instant adoptionism,” since presumably the human involved would have existed on his own apart from the addition of the divine nature. The point here, however, is that, with the incarnation occurring at the moment of conception or birth, there would never have been a moment when Jesus was not both fully human and fully divine. In other words, his being both divine and human did not depend on the virgin birth  (772).

F.F. Bruce, on the other hand, quotes W.R. Matthews: “though we may still believe in the Incarnation without the Virgin Birth, it will not be precisely the same kind of Incarnation, and the conception of God’s act of redemption in Christ will be subtly but definitely changed” (quoted from Essays in Construction, p. 128, in Carl Henry, ed. Basic Christian Doctrines, p. 130). Personally, however, I can not imagine what sort of changes this would have brought about, because I think that Erickson’s approach to this question is correct, and is thoroughly orthodox.

If the virginal conception was not necessary for the incarnation, why did God do it this way?

Since the deity of Jesus and the sinlessness of Jesus have probably been the two most common reasons cited by evangelicals for the necessity of the virgin birth, when we remove those reasons we are naturally left to wonder what then was the reason?

(Though I do not accept the argument that virginal conception was necessary for the sinlessness of Jesus, I can’t take the space now to spell out my reasons for this.)

E. J. Carnell helpfully suggests that the virgin birth was a sign for Mary and Joseph which would “admit of no doubt” and yet which would be secret, “lest the foes of righteousness  begin their nefarious work before Christ’s hour had come” (in Readings in Christian Theology, Volume 2: Man’s Need and God’s Gift, ed. Millard Erickson [MNGG], p. 317). During the 30 years that elapsed before Jesus began his ministry, Joseph and Mary had no proof of Jesus’ divinity other than the signs that surrounded his birth. For Carnell, its major importance for us is that “it plays a major role in connecting the promises of the Old Testament  with their fulfillment in the New Testament” (MNGG, p. 318).

Fairly briefly, here are some reasons why I think that we should consider the virgin birth theologically significant.

1. It reminds us that our salvation is the supernatural and sovereign work of God (cf. Erickson, Christian Theology, 774). It is a sign that “Jesus Christ is a new beginning.” He is a “divine intrusion, the last, great culminating eruption of the power of God into the plight of man” (Donald Macleod, The Person of Christ, p. 37).  Mary was completely passive, a factor that nullifies efforts in Roman Catholic theology to make her an active contributor in providing salvation (Sinclair Ferguson, The Holy Spirit, p. 41). In the genealogy of Jesus 5 mothers are mentioned, but a special qualification is stated regarding Jesus:  he was uniquely “from the Holy Spirit” (ek pneumatos hagiou, Mt 1:18,20).

On this point, I appreciate Carl Henry’s observation that “as Jesus was born from above, so all members of the new humanity must be born again to newness of life in him by the sovereign action of the Spirit. . . .To become a Christian is no more a natural possibility than the Word’s becoming flesh.  It is the regenerative work of the Spirit . . . .” (MNGG, 313-14). Sinclair Ferguson suggests that John may have had this double entendre in mind in John 1:13.  Irenaeus and Tertullian, in texts earlier than any of our biblical manuscripts, refer it to Jesus who was “born not of human decision or a husband’s will, but born of God,” but this is not well attested in the manuscripts of John. Yet, there is no reason why John could not have had a parallel in mind, as Abraham Kuyper suggested: “St. John . . . undoubtedly borrowed this glorious description of our higher birth from the  extraordinary act of God which scintillates in the conception and birth of Christ” (cited by Ferguson, 41).

3.  It provides corroboratory (though not necessary) evidence of the uniqueness of Jesus  which was essential to his work as savior.  Though truly united with us in human  nature, “his person is not of Adamic stock, he does not share in the guilt and condemnation of Adam (Rom 5:12-14)” (Ferguson, 42). He is capable of bearing others’ guilt because he is not personally liable for it.

4.  It gives evidence of the power and sovereignty of God over nature (Erickson, 774).

5.  It indicates that it was our human nature which the Word assumed, through Mary. He came “in the likeness of sinful humans” (Rom 8:3) and yet remained “holy, innocent, unstained” (Heb 7:26, ESV) because of the work of the Holy Spirit (Lk 1:35).

6. It prohibits any adoptionist Christology. The Son of God becomes the man Christ Jesus by incarnation through the power of the Spirit, not by an act of adoption.

On this point, I should note that the proposal that the virgin birth was not necessary for the incarnation is acknowledged by Donald Macleod to be “not impossible,” but he considers it “incongruous” and therefore studiously avoided by the New Testament (e.g. Lk 1:35) (38). Macleod suggests that without a virgin birth “it would be very difficult to avoid some form of adoptionism because on this construction God would make the human nature of Christ his own only after it had been brought into existence by some other agency. According to the doctrine of the virgin conception, however, the human nature of Christ does not exist for a single moment except as the humanity of God. It never becomes God’s human nature. It comes into existence united to God” (38). Without  a virgin birth, Jesus would have had a double paternity, a divine Father and a human father, Joseph.

I certainly concur with Macleod that it is essential for us to affirm that “the human nature of Christ does not exist for a single moment except as the humanity of God” (38). I also grant that virginal conception might make it easier to see how this would be the case if no human father were involved. But I think that Macleod’s stress on the importance of virginal conception as a means of protecting our Christology from adoptionism might risk pushing people in a different, but not less dangerous, direction.

Not uncommonly, I hear people speak of the conception of Jesus as having come about through the combination of a human egg and divine sperm. But this would seriously detract from the complete humanity of Jesus, because his entire DNA would not be human. He would be represented as both divine and human in a completely unacceptable way, for his humanity would not be complete. A more orthodox hypothesis is that God created the male component of the DNA of Jesus, the second Adam, by direct action, analogously to the creation of the first Adam. I’ve wondered if it might have been a case of divinely effected AIH, by which means God would have made Joseph the physical father, but miraculously. But here is the important point for us to note: however the human sperm which contributed the male factor in Jesus’ fully human DNA came to be, we still have a conception in which a human being is conceived who is personally the eternal Word of God from the very beginning of that human life. Had Jesus been conceived through a natural marital relationship between Joseph and Mary, the truth that Macleod is trying to protect would have been no less endangered than in a miraculously accomplished fertilization of Mary’s egg which must not be imagined to be divine sperm. Macleod’s concern about the complication of both human and divine paternity is valid, but virginal conception does not ensure orthodox Christology as straightforwardly as Macleod suggests.

7.  It indicates the engagement of the whole Trinity in the redemptive act. The Father sends the Son, but this is executed by the Spirit as is characteristic of his work (Ferguson, 43).

Mysterious though it is, the virgin birth is a wonderful truth that we celebrate this Christmas. I do so, believing that this is how God chose to bring about the incarnation, even though it was not the only way he could have done it.

Thanks be to God! Have a blessed Christmas.

This entry was posted in Christology and tagged incarnation, virgin birth. Bookmark the permalink.

One Response to Was virginal conception necessary for the incarnation?