In regard to the question whether Muslims and Christians worship the same God, an important factor to consider is that Arabic speaking Christians also call God Allah when they speak of the one whom we worship as the God and Father of our Lord Jesus Christ. This point is made in a rather sobering interview with Archbishop Sebastia Theodosios (Atallah Hanna), who is the only Orthodox Christian archbishop from Palestine stationed in Jerusalem and the Holy Land. (All the other bishops of the Patriarchate of Jerusalem are Greeks). He talks about the fact that Israeli authorities treat Palestinians as Palestinians, without regard for their religious affiliation. So they all suffer together, and they are consequently involved jointly in the struggle to better the situation of Palestinians. He himself has been detained several times, or stopped at the border and had his passport taken away. “Among all Jerusalem clergymen he is the only one who has no privilege of passing through the VIP gate in the airport – because of his nationality.”

That aspect of the interview is important, but my reason for mentioning the article here is with regard to the language Palestinian Orthodox Christians use for God, in common with Muslims. Nadezhda Kevorkova, in the preface to her interview with the Archbishop, notes that,

When talking on the phone he says a lot of words you would normally hear from a Muslim: “Alhamdulillah, Insha’Allah, Masha’Allah”. He speaks Arabic, and the Arabic for ‘god’ is Allah, whether you are a Christian or a Muslim.

Here is a short extract from the interview, with responses to a couple of questions particularly 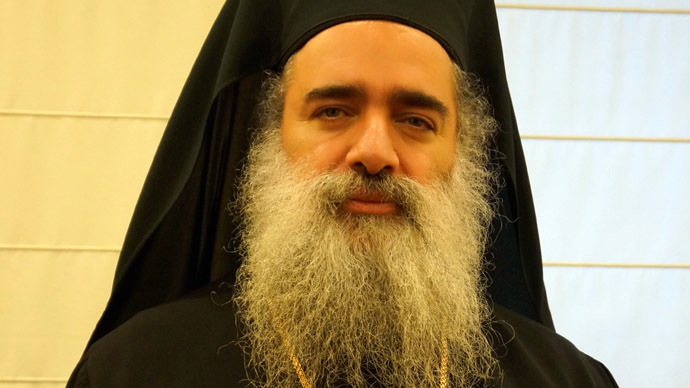 pertinent to my focus here:

To a Western mind, Allahu Akbar sounds like a threat. What do Christians of the Holy Land think about them?

We Christians also say Allahu Akbar. This is an expression of our understanding that the Creator is great. We don’t want this phrase to be related to terrorism and crimes.

We refuse to associate these words with massacres and murders.

We speak against using this phrase in this context. Those who do, they insult our religion and our religious values.

Those using these words while taking some unreligious, unspiritual, uncivilized actions are harming the religion.

Allahu Akbar is an expression of our faith.

One must not use these words for non-religion-related purposes in order to justify violence and terror.

For us, Allah is not an Islamic term. This is a word used in Arabic to indicate the Creator who’s made the world we are living in. So when we say Allah in our prayers we mean the Creator of this world.

In our prayers and pleas, in our Orthodox Christian religious ceremonies we use exactly this word. We say, glory be to Allah in all times. We say Allah a lot during our liturgy. It’s erroneous to think that the word Allah is only used by Muslims.

We the Arab Christians say Allah in our Arabic language as a way to identify and address the Creator in our prayers.