Renewed interest in the nature of biblical authority

Inerrancy is back on the table in evangelical discussions. It is the theme of the annual meetings of ETS in Baltimore, which are underway as I write, though I am not able to attend. It is also the focus of a few recent books. I have wondered just what triggered this new interest, and so my attention was caught by comments made by J. Merrick and Stephen M. Garrett in their introduction to Five Views on Biblical Inerrancy. 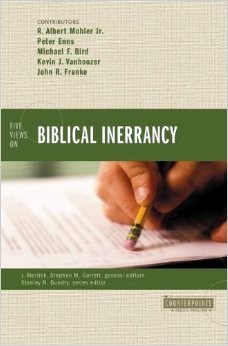 Since Scripture is the source of evangelical faith, and since inerrancy is ultimately a matter of reading Scripture faithfully, inerrancy is often regarded as the essence of genuine faith. It should come as no surprise that inerrancy is resurfacing as evangelicalism is increasingly fragmented and contested, submerged between “emergence” and “resurgence.” All indications are that evangelicalism is once more poised to “battle over the Bible” and focus afresh on the doctrine of inerrancy. This time, however, evangelicals are not battling mainline Protestants; they are battling themselves.

Our project is concerned that this link between inerrancy and evangelical identity can obscure the meaning of inerrancy and frustrate the vitality of evangelical faith. Because inerrancy is seen as the guarantor of evangelical identity, many of the conversations about it are negative in thrust, focusing more on what could be lost if inerrancy, or at least a certain version of inerrancy, is not maintained. Moreover, inerrancy is not simply a stand-alone doctrine; it is interconnected with others. Unfortunately, the electricity of the debate obscures these other doctrines, limiting the conversation and diminishing evangelical faith. There is great risk, then, that inerrancy may become the only cipher for a certain account of what it means to be an evangelical.

Accordingly, for the sake of the health of evangelicalism and the vibrancy of its faith, this book aims to concentrate not only on the doctrine of inerrancy but also on the key doctrines that inform what it means to say that Scripture is inerrant. In other words, we want to encourage conversations on the doctrinal rationale of inerrancy and its Scriptural warrant rather than on why it may or may not be detrimental to evangelicalism. For in the final analysis, our beliefs should be motivated by theological and biblical reasons rather than by sociological ones. Said simply, we should hold to inerrancy not because it secures evangelicalism but because it teaches evangelicals about God and how to put faith in him. (9-10; cited by Jeremy Bouma)

I picked up another interesting perspective on the renewed interest in biblical authority from an article by Gerald McDermott on “The Emerging Divide in Evangelical Theology” (JETS 56/2 [June 2013]:355-77). He proposes that “while evangelical theology has come into its own in recent decades, it is also deeply divided. One branch contributes to the development of historic orthodoxy, while another follows a trail blazed by Protestant liberals” (353), and he calls these “new opposing camps the Meliorists and the Traditionalists” (363). Among the characteristics McDermott finds in Meliorists, is “a new hesitation . . to support plenary inspiration—the view that the words of Scripture are inspired” (366). Roger Olson reports that some post-conservatives see “the words of Scripture as more the human authors’ than the Holy Spirit’s,” and they accept Bernard Ramm’s Barthian view that the Bible itself is not the Word of God but is a culturally conditioned ‘witness’ to the Word of God (367; citing Roger Olson, Mosaic of Christian Belief 102; Reformed and Always Reforming, 107-10).

because of Meliorist insistence on the final authority of Scripture over tradition. If we can overrule tradition because of Scripture, but the Words of Scripture are neither the Word of God nor inspired, then how do we decide which concepts ‘in, with and under’ the words are the Word? And who decides? If the biblical authors were culturally conditioned, and all of the Great Tradition is culturally conditioned, what prevents the evangelical theologian from being just another culture-bound interpreter of spiritual experience? (367)

Meliorists overreacted to evangelical excesses in the inerrancy debates of the 1970s. In understandable distaste for rationalistic, ahistorical, and unliterary readings in the “Battle for the Bible,” Meliorists separated revelation from the biblical text, and located a so-called Christian essence in religious experience fundamentally removed from words and concepts. (374)

McDermott finds most Meliorist conclusions orthodox, but “their views of Scripture and experience converge with Schleiermacher more than most want to admit.” For this reason, he suggests that “Meliorist evangelical theology may resemble that of liberal Protestantism before too long, even though the top Meliorist theologians will reject that move. As in any movement, epigones are more consistent with their mentor’s principles than the mentors were. Theological innovators are more willing to hold in tension competing principles, but disciples collapse those tensions” (375). McDermott thinks that the two groups which James Davison Hunter called “orthodox” and “progressive,” nearly twenty years ago, “have moved even further apart in these last twenty years,” and he expects that the distance between Meliorists and Traditionalists will likewise grow in the next twenty years, so that “Meliorists may have difficulty being recognized as evangelicals” (375-76).

Will we make progress in this new consideration of the nature and authority of Scripture?

I do not have McDermott’s expertise in the study of the church’s history, but I share his concerns about some of the methodological moves made by the evangelical theologians he dubs Meliorist. I read and hear the words of all of Scripture as God’s Word in the words of the humans whom the Spirit inspired. I am not post-conservative, and I do value highly the Great Tradition of the church as the Spirit led God’s people through the Word in past centuries, so I do not see myself among those whom McDermott calls “Meliorists.” But I don’t fit too easily into his category of the “Traditionalists” either, though I definitely lean more strongly in that direction than I do toward Meliorism.  I think that it is good for the church to reformulate God’s revealed truth in ways that speak it faithfully once more to new situations, as the Spirit illumines God’s Word to us once again. I have never been reluctant to affirm the inerrancy of Scripture, and when I first learned, a couple of years ago, that ETS was going to make this its theme in the annual meeting of 2013, I was a bit surprised. I am beginning to understand the wisdom of putting this issue back on the table.

Now that the topic is on our agenda, however, we may wonder if progress is going to be made in this new round of in-house discussions of biblical authority, or if we are going to simply hear previous arguments reiterated. Given the beneficial effect of traditions in the life of the church’s doing of theology, it is right and good that the latter should occur; we do not have to reinvent the wheel in each generation. But in a helpful post by Louis McBride I observe that new perspectives are also being brought to the discussion, as in the use of the language of speech-act theory by John Walton and D. Brent Sandy, in The Lost World of Scripture.

McBride gives us this outline of their approach: 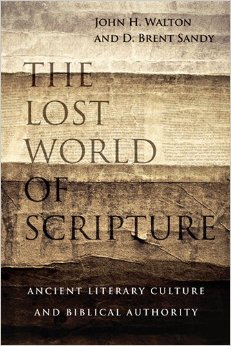 “The communicator uses locutions (words, sentences, rhetorical structures, genres) to embody an illocution (the intention to do something with those locutions—bless, promise, instruct, assert) with a perlocution that anticipates a certain sort of response from the audience (obedience, trust, belief). A common illustration is the words spoken in a wedding. When the bride and groom say ‘I do’ they are using a very basic locution—words that could be used in any number of contexts with varieties of meaning. But in this context they are used for a specific illocution: a lifetime vow of faithfulness and commitment. The resulting perlocution is the implementation of that vow throughout life.” (41)

What this means is that “[c]ulture-specific aspects of a locution do not determine the illocution. That is, even though people in Israel believed there were waters above the earth held back by a solid sky, or that cognitive processes took place in the heart or kidneys, the illocution of the texts is not affirming those beliefs as revealed truth. Culture-specific aspects of an illocution do not have a universal perlocution (eating pork, circumcision, head covering). Culture-specific aspects of the perlocution need to be translated to an appropriate contemporary perlocution. So our response to the second or third commandment will be adjusted to our culture and will differ in specifics from the response expected in the ancient context. . . . To set aside such culturally bound locutions does not jeopardize the illocution or the authority. . . . In conclusion then, God accommodates human culture and limitations in the locutions that he inspires in the human communicator, but he does not accommodate erroneous illocution or meaning. . . .These human illocutions have authority because they are the means by which God gives his illocutions. We need not be concerned that culturally limited locutions will diminish the Bible’s authority, but we dare not dismiss the illocutions and focused meaning as accommodating error. If meaning that carries authority is derived from the human communicator’s illocution, we dare not supply our own substitute illocutions and meanings derived from the human communicator’s locutions.” (45-48)

I agree with McBride that this fresh way of looking at the issue may be helpful. For one thing, it can give us a framework from within which we can analyze competing proposals. We may be able to identify where the differences lie and to approach them with a measure of objectivity, before our emotions hijack our thinking.