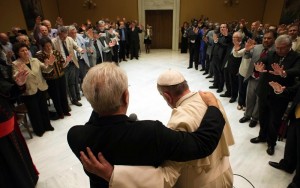 Division in the church is a great scandal and a hindrance to our witness (Jn 17:20-23), but can the breaches possibly be healed, even between the truly believing portions of the church in its major branches? Pope Francis hopes so and plans to move it along. This is something that will bear watching, as we pray that true unity in the faith will come to be evident. An interesting story is told by The Catholic Herald:

Somewhere in Pope Francis’s office is a document that could alter the course of Christian history. It declares an end to hostilities between Catholics and Evangelicals and says the two traditions are now “united in mission because we are declaring the same Gospel”. The Holy Father is thinking of signing the text in 2017, the 500th anniversary of the Reformation, alongside Evangelical leaders representing roughly one in four Christians in the world today.

But the article is not blind to the fact that Evangelicals are the least likely to consider unity possible or even desirable.

Francis thinks that the joint declaration on justification between Catholics and Lutherans was a major turning point.

But even if the Pope does sign the declaration in two years’ time, full, visible unity between Catholics and Evangelicals will remain unlikely. As Fr Dwight Longenecker, an American Catholic priest who was raised Evangelical, explains, there is no single, authoritative body that could be reconciled with Rome.

“‘Evangelicals’ could include the most rabid, anti-Catholic, fire-breathing fundamentalists right through to the prosperity gospel televangelists, ‘Evangelical’ Anglo-Catholics, charismatics and modernist Protestants,” he says.

He suggests that few are truly interested in unity with the Catholic Church. “For most Evangelicals any reunion with Rome is very low on the agenda if it is there at all,” he says. “This is for two reasons: despite their current friendliness toward Catholics they still have a deep distrust of Rome. They simply cannot conceive of the idea that ‘Roman Catholicism’ has much good in it. They might view us as brother Christians, but we are still deeply deluded.

“Second, their ecclesiology is that of the invisible church only. They do not see the thousands of Protestant churches as a problem because the ‘institutional church’ is man-made and temporal, so it doesn’t really matter which one you belong to. Formal reunion of any kind, for them, simply doesn’t matter.”

Granting that evangelicalism is not itself unified organizationally as the Roman Catholic Church is, I think that the World Evangelical Association is a critically important organization in this matter.

Miracles can happen, but only God can accomplish them. I’m hoping that this will be one miracle which God will choose to bring about in my lifetime, for the sake of his church and its ministry in the world. As with all miracles, I am not a man of strong faith, but I am not an unbeliever either, so I will be watching what happens in coming years with prayerful interest. Jesus prayed for the visible unity of the church (Jn 17:20-23), and I assume that he still does. What I wait to see is how he will further the answer to this prayer and whom he will use from the evangelical community to participate in this work.

2 replies on “Will Pope Francis’s tenure see the end of the Reformation?”

This is an interesting contrast to Roger Olson’s recent post, “True Christian Ecumenism: Reconciled Diversity.” You seem to hope for a more traditional form of ecumenism than Roger does.

Perhaps you are right, Steven. I agree substantially with what Roger says about the value and the inescapability of differences within the church. But I do feel more strongly than he does that the divisions which exist within the church are scandalous. I don’t think that we should throw up our hands and accept defeat in this regard; rather, we should do all that we can in good conscience to pursue fellowship between followers of Jesus, in spite of our theological differences, but not diminishing their reality.